When visiting the archaeological site at Caesarea don’t miss the lovely beach just north of the site with the aqueduct. The aqueduct was built by King Herod to bring water from the Shuni spring, south of Mount Carmel, about 10km to the northeast to the city. In the second century, to provide additional water, a second aqueduct was built alongside the first by the 10th legion under the Emperor Hadrian that brought water from Tanninim (Crocodiles) river. The aqueduct continued to supply water to Caesarea for 1200 years.

You can click on the image for a larger view (which may take some time to load depending on your Internet connection). Please share this post with your friends by clicking on the icons at the end of this message.

For more information about the archaeological site of Caesarea see my post at https://israeltours.wordpress.com/2011/01/03/caesarea-maritima-herods-promontory-palace/

There are many well-known sites in Israel that are popular, that visitors see again and again while missing out on other hidden gems. Many people have seen the Chagall Windows at Hadassah hospital in Jerusalem but far fewer probably know about the stained-glass windows that Israeli artist, Mordecai Ardon designed. Many people have visited Yad Vashem but far fewer have visited Lohamei HaGetaot, a kibbutz near Akko founded by those who fought and survived the Nazis.

Many people are familiar with the Bahá’í gardens in Haifa but far fewer have visited the Bahá’í gardens just north of Akko. The gardens in Haifa comprise a staircase of nineteen terraces extending all the way up the northern slope of Mount Carmel. The golden-domed Shrine of the Báb, the resting place of the Prophet-Herald of the Bahá’í Faith, stands on the central terrace, looking across the bay towards Akko. There the gardens at Bahjí reflect the beauty and serenity of the Haifa gardens.

The gardens form a large circle surrounding the historic mansion where Bahá’u’lláh, the Prophet-Founder of the Bahá’í Faith, lived during the final years of his life after he was released from Acre Prison by the Ottoman Turks and the shrine where he is buried.

Later during the British Mandate period, Jewish resistance fighters were held in the Acre prison and 9 died there on the gallows. Today the prison is a museum and has been recently updated to dramatically retell the story of the Hagana, Irgun and Lehi struggle with the British, definitely worth a visit. There is another less well-known museum to the underground prisoners in Jerusalem in the Russian compound.

One of the striking formations near the entrance is a trimmed hedge in the form of an aqueduct. Many people are familiar with the aqueduct that Herod built, onto which the Romans tacked a second aqueduct to bring water to Caesarea but there is another less well-known aqueduct. Just north of Akko, by Kibbutz Lohamei HaGetaot is an aqueduct from the Ottoman period built on an earlier one from the Hellenistic period that was built to bring water from the Cabri springs to Akko. 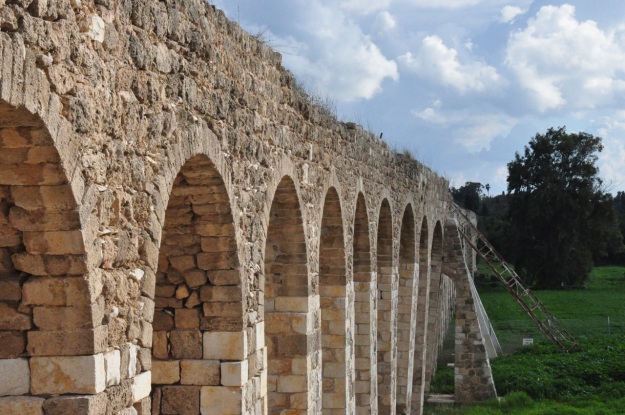 Kibbutz Lohamei HaGetaot was founded in 1949 by a community of Holocaust survivors, members of the Jewish underground in the ghettos of Poland, and veterans of partisan units. Integral to the kibbutz from the beginning was the Ghetto Fighters’ House – Itzhak Katzenelson Holocaust and Jewish Resistance Heritage Museum for documenting and researching the Holcaust. The museum serves as a testimony to the stories of the survivors and an expression of the return of the Jewish people to our land.

Beside it is Yad Layeled (Monument to Children), an educational center commemorating the one and a half million Jewish children murdered in the Holocaust. The building was designed by Ram Carmi of two main architectural elements: a central 3-story cone and a descending ramp that encircles the cone and defines the path through the space. The space is lit by natural light that enters through a circular stained-glass window on the domed ceiling of the cone that becomes dimmer as you descend until you reach the innermost sanctum and eternal flame.

Yad Layeled gives the visitor an intimate view of the children’s world during the Holocaust and opens a door to their dramatic experiences and pain. It is unique in that it is intended to reach out to young people (ages 10 and up). The other permanent exhibitionis dedicated to Dr. Janusz Korczak, a Polish-Jewish doctor, author and educator who devoted his life to children. Many people visit Yad VaShem but fewer people know about Lohamei HaGetaot. That’s a good reason to hire a guide – a guide can take you places and share experiences that you probably won’t discover on your own.

The first aqueduct was built by Herod at the time the city of Caesarea-Maritima was founded and brought water from the Shuni spring, south of Mount Carmel, about 10KM to the northeast of the city. The water flowed on a single raised channel.

When this was not sufficient, a second “lower” aqueduct was built by the Legions of the Emperor Hadrian (2nd C CE). It brought water from Tanninim (Crocodiles) river. This section, with a tunnel of about 6KM long, was tapped into the older aqueduct, and doubled its capacity and its width. The builders used the same building materials and style, so it may be difficult to see that the pair of channels were built at different times. The aqueduct continued to supply water to Caesarea for 1200 years.

Just past the entrance to Beit Hanania you can find the northern section of the aqueduct and the second aqueduct (Hadrian) connecting to the older one (Herod). In this section there are two stone tablets that were placed into the wall by its builders, the legion of the Emperor Hadrian. The right tablet clearly shows: “IMP CAES(ar) TRIAN HADR(ianus)”. The other tablet is of the Tenth Legion (the Imperial eagle without its head standing on a wreath).

The Israel Trail winds its way beside the aquaduct, through the Arab town of Jizr a-Zarka and then south along the coast to Caesarea. On the beach closer to the Caesarea archaeological park there is another section of the aqueduct. In fact it makes a great hike with the whole family from here along the beach north to Dor or a little further to Habonim.