Yeti off road in the Judean desert to the foot of a mountain fortress called Hyrcania and then we climbed to the top (~200 meters).

Herod and notorious as a place where he imprisoned and killed his enemies, even his own son and heir Antipater. Josephus relates that, along with Machaerus (north of Dead Sea in present day Jordan) and Alexandrion/Dock (both on our bucket list!), Hyrcania was one of three fortresses that queen Salome Alexandra did not give up when she handed control of her strongholds over to the Pharisees.

The water system for the Hyrcania fortress is on the western side, a Herodian period upper aqueduct and a later Byzantine lower aqueduct bringing water to more than a dozen cisterns cut into the mountain. In building the fortress the area was quarried for stone and three large rectangular holes cut out of the bedrock were left, used as swimming pools and reservoirs! So Herod!

In the quiet of this desert some 500 year later in the Byzantine period Sabbas the Sanctified founded a cenobium called Castellion on the mountain top on which Hyrcania sat, part of the satellite community associated with the monastery at Mar Saba 4 km to the southwest.

I’m looking forward to your next visit. I hope I’ll see you soon – I’ll be ready.

Just when we think maybe we’re beating Covid-19 and life and tourism may return to a new normal we get hit with an oil disaster along the whole length of Israel’s Mediterranean coastline. https://www.timesofisrael.com/tarred-and-shuttered…/

Here is a reminder of how things should be.

This is the latest addition to Coastline (set of 12 so 2 more to go), coast at Dor with the remains of the harbor and a mock-up (courtesy Kuala) of how it might look on the wall.

Text and photographs on this website are © Shmuel Browns

The last time it snowed in Jerusalem was February 2015 and I wrote about it here.

Headed out early this morning to take photographs of the snow that had fallen overnight. Idea was to check whether Herodion was covered with snow but it quickly became apparent that there hadn’t been enough snow.

Across from Herodion is the Jewish settlement of Tekoa, home of the prophet Amos. The early morning sun lit up the houses and to the south in the distance were the Hebron Hills covered in snow.

Traveled on a road for the first time and discovered these hills covered with a dusting of snow. If you can pinpoint where these hills are I’ll buy you an ice-cream.

In total I drove a 100km looking for snow pictures. It was cold and wet out. This photo was the last one taken today, from Metzad, looking east toward the Dead Sea and Jordan.

Driving towards the Palestinian town of Si’ir I passed terraces with almond and olive trees. I almost didn’t make the effort to get out of car to get this shot but I’m glad I did.

If you’re into photography I’d be happy to guide you to places throughout Israel and you’ll get some great photographs.

Photographs on this website are © Shmuel Browns (unless marked otherwise) – if you are interested in buying or using one of my photos for your own project please contact me.

If you’re reading this then you made it through 2020, a year that probably didn’t turn out quite the way you thought it would. With the Covid-19 pandemic I didn’t travel out of Israel so photographs in 2020 were all taken here and quite a variety, showing that Israel is truly a great place to visit. And you probably weren’t able to come to Israel so I haven’t had any guiding for a year, since last February. To stay sane Alan Harkavy, a good friend and fellow guide and I used the time to explore Israel more deeply and become even better guides (and then 2 more guides Leontine Caen & Eva Grunhut joined us) and we look forward to sharing these new experiences with you when you come. I will share some of our adventures in another post.

I’ve reviewed the many photographs I took this last year and I’ve chosen a dozen or so favorites to show you here. These photos were taken with a Nikon D850 digital DSLR with the Nikkor 28-300mm lens. I also got a DJI Mavic Air 2 drone and will share a few of those photos in another post. If you like these photos on your computer screen you should see what they look like when they’re printed BIG (47x70cm image) in high-resolution, framed and hanging on the wall.

When you purchase one (or more) of these photographs for your home or office they will remind you of Israel. You can contact me here. Thank you for your support.

Just click on the thumbnail image you would like see at full size, clicking the arrows (< and >) will move you through the images.

If you didn’t find exactly the photograph you want, I have another set of photos here. You can contact me by clicking here.

Since the lifting of Covid-19 lockdown I’ve been doing a lot of traveling around Israel, discovering new places and have taken a lot of amazing photographs. I’ve now printed more than 20 of these photos in LARGE size (70x46cm) and am offering them for sale as limited edition prints. Please contact me if you are interested in any of these photos to enhance your space. And if you email me the name of the photo you’re thinking of with a photo of your room (image on left of your dining room for example) I’ll send you back an email with the photo hung digitally on your wall (photo on right).

Clicking on any of the images will display the thumbnail at full size. I hope you enjoy these landscapes of Israel.

Here are two more images that are available (in a vertical form).

Today for my birthday we drove up to the Sea of Galilee, along the eastern shore until Ein Gev (highway <92>) and then turned off beside a field of banana plants on a road that winds its way onto the Golan. After a number of hairpin turns we reached a parking area and walked to the summit (350 meters above the lake) to the remains of the Byzantine city of Sussita (known as Hippos in its earlier Hellenistic incarnation). 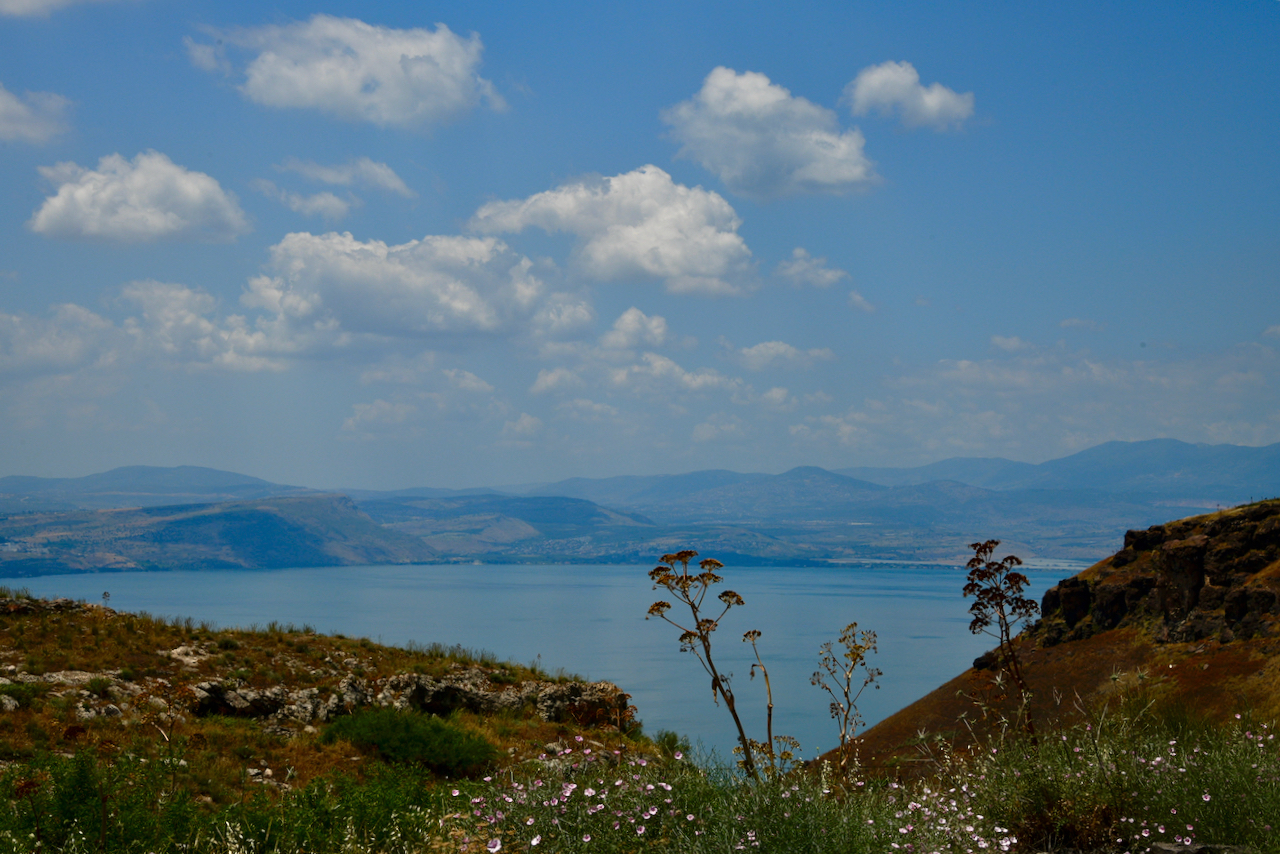 With General Pompey’s conquest of Sussita in 63BCE it became one of the cities of the Decapolis, a group of ten Roman cities on the eastern frontier of the Empire. According to Josephus, Hippos had a mixed population of Christians (eight churches have been discovered), pagans and Jews (but so far no synagogue has been found).

Sussita is a remarkable archaeological site and yet is hardly known and seldom visited. Most of the building and the street paving stones are of black basalt (rather than white limestone) and the main Roman street that runs for a total length of about 500 meters like a spine across the top of the hill is not the usual Cardo but actually the Decumanus.

To the left of the site off the Decumanus is the bath-house with a great view of the lake below. 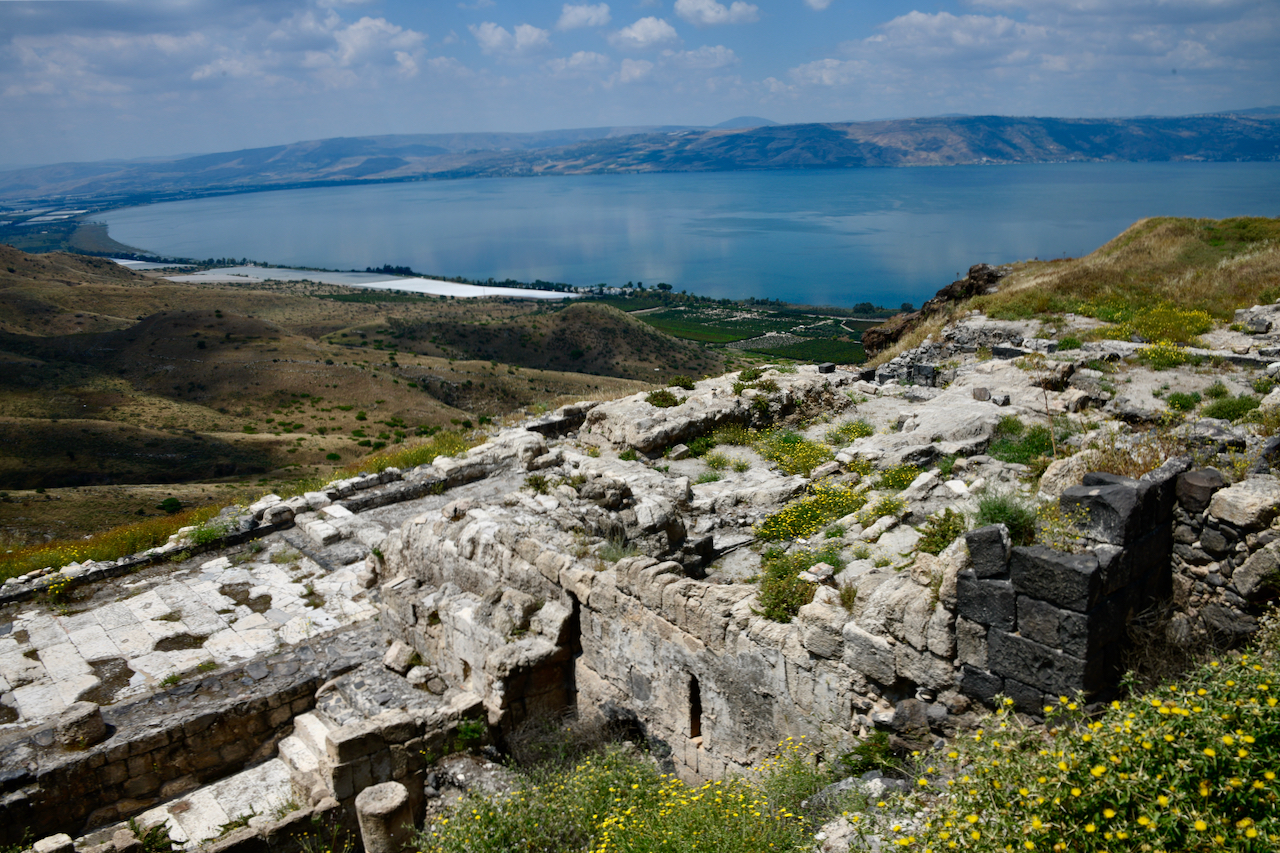 Here is the view looking west along the Decumanus. 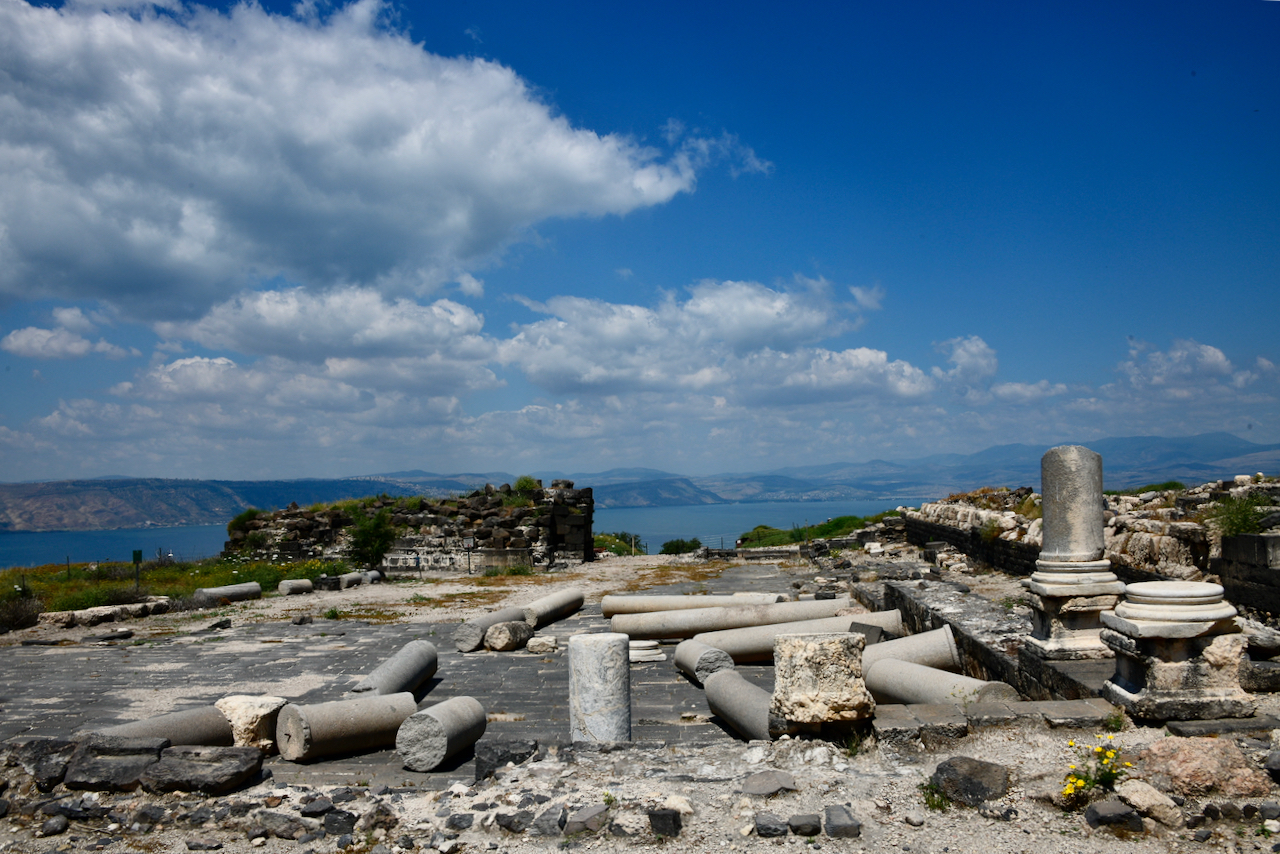 To the north is a large public building with plastered columns and another church (NorthWest Church).

On the south side of the Northwest Church are two rectangular pools, the walls are plastered and there are steps leading down to the bottom. They look like they could be ritual baths (mikve) but actually these basins were used to collect grape juice. Next to the basins is a large area, the treading floor, where the grapes were placed and crushed by the feet of the workers in order to extract their juice.

Besides three wine presses in the area there is also an oil press and storage area for agriculture products used by the priests and monks.

In 2009 archaeologists uncovered an Odeon (in Greek, to sing), a semi-circular mini-theater with about 600 seats used for musical shows and poetry reading, the first to be discovered in Israel. 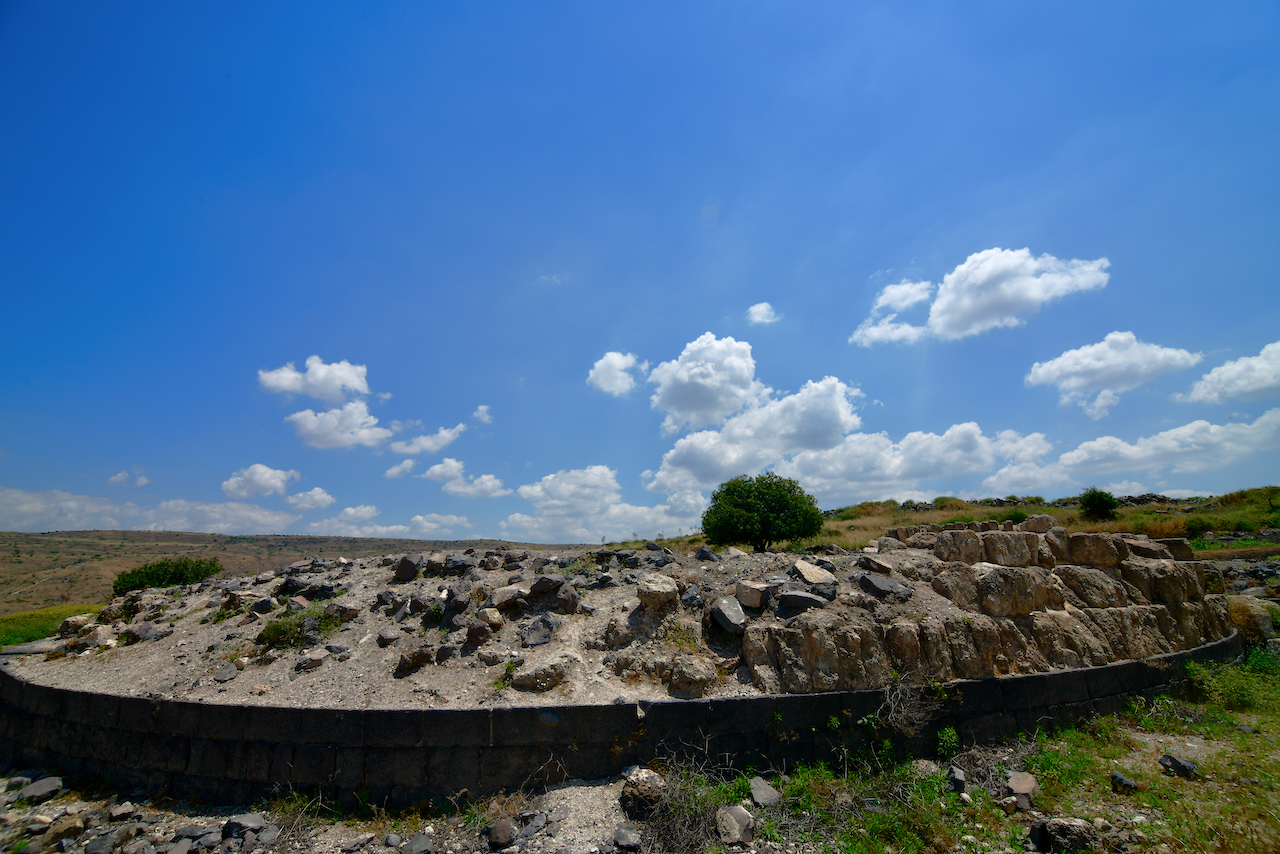 Sussita and Bet Shean, both cities of the Decapolis;  small theaters; churches and synagogues; aqueducts; earthquakes that leveled cities until archaeologists re-discovered them – there is much to learn and experience with a guide.

You can read more about the excavations at their website http://hippos.haifa.ac.il or on FB at Hippos-Sussita Excavations Project