Just recently I received an email from Australia commenting on my German Colony tour.

I am a descendant of Matthaus Frank, he is my great-grandfather, and I was hoping you could send me, via email, information on him as I have very little knowledge about him to pass on to my daughters. Thank you in advance, Kind regards, Petra Frank, Clayton, Australia.

It’s always nice to hear from someone who is engaging with my site. It’s an opportunity to delve a little deeper into the neighborhood where I live and know very well. So I did some research and found some old photographs in architect David Kroyanker’s excellent book “Jerusalem – the German Colony and Emeq Refaim Street” (the book has only been published in Hebrew). I also went out and took some of my own photos of the German Colony today and the Templer cemetery. I learned that there were two Matthaus Franks, father and son and that the son wrote about his life in Jerusalem. For those into genealogy there is enough information in the cemetery to start a family tree.

The German Colony in Jerusalem was founded when a small group of German Templers arrived in 1868. At first, they rented housing in the Old City and in Mishkenot Sha’ananim, the first Jewish neighborhood built outside the walls a few years earlier. From 1867 it became possible for foreigners to purchase land, on condition that their European government had signed an agreement with the Ottoman Turkish authorities which Prussia, representing Germany, did in 1869. Consequently, in 1872 young Matthaus Frank (1846-1923) purchased a large plot of land suitable for farming from the Arabs of Beit Safafa for his father-in-law, Nikolai Schmidt. Schmidt travelled to the Holy Land in 1874 with a group including his wife Katharina but died on his way to Jerusalem. The German Templers bought the land from Frank and divided it into 1 dunam building lots – bounded by Emek Refaim Street and Derekh Bet Lehem. This became Jerusalem’s German Colony and in 1878 the spiritual center of the movement with a school, sport club and  Gemeindehaus, the community center and church on Sunday. Two historic events took place shortly thereafter, the completion of the railway that joined Jerusalem to the port at Jaffa in 1892 – today the station has been renovated and is a popular meeting place of food and culture and the German Kaiser Wilhelm II and Augusta Victoria’s official visit in 1898 – the three churches that were initiated then stand to this day as part of Jerusalem’s skyline.

This aquarelle painting by Gustav Bauernfeind (born Germany 1848 – died in Jerusalem, 1904 and buried in the Templer cemetery) and the photograph from about 1890 (train station is already built) document what the German Colony looked like. The painting was presented to the Kaiser on his visit. Bauernfeind was a German painter, illustrator and architect of Jewish origin, considered to be one of the most notable German Orientalist painters.

Frank kept 5 dunams for himself and on it he built his house in April 1873. It was the first building to be completed, the home of the miller Matthaus and Gertrude Frank, today #6 Emek Refaim Street. You can see the date on the keystone of the arch above the door and the name EBEN EZER carved in the stone lintel, mentioned in Samuel 7: 11 when God helped the Israelites against the Philistines.

Frank installed the first steam-driven flour mill and ran a bakery. Up until then there were only windmills for grinding wheat. Two exist to this day, Montefiore’s windmill built in 1867 beside Mishkenot Sha’ananim and a Greek owned windmill on Ramban Street, later the office of Erich Mendelsohn who fled Nazi Germany in 1934 and split his time as a successful architect between London and Jerusalem.

A large garden with fruit trees, vegetables and flowers, and the  ‘proud’ two-storey house, like a fortress or castle, that’s what we thought as children, with a steam-driven mill, stable for donkeys and other buildings, with the spacious living quarters above, there was the kindergarten of the Colony for many years. Behind the house was a large vineyard, and the property was six times as large as a regular property. In addition to the usual underground  water cisterns there were two open pools, one large and one small where sometimes the children were allowed to swim and so perhaps this was the first private swimming pool in Jerusalem… In later years, the Frank house was a popular meeting place. 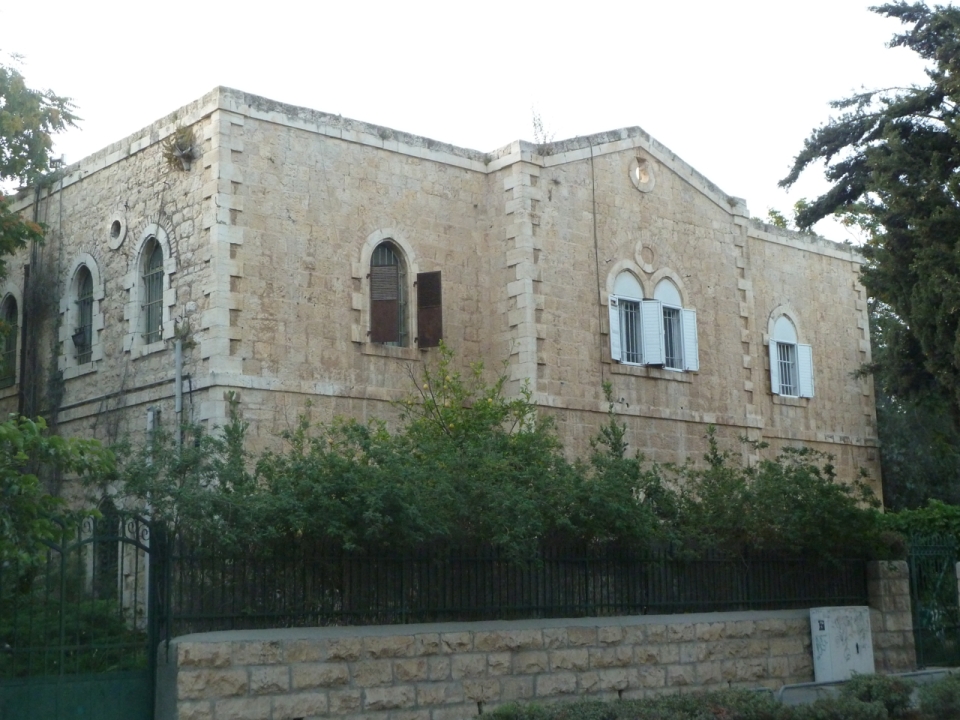 In 1910, Mattheus Frank the son (1877-1927) decided to rent the house to a Templer family, the Kirchners, who lived there until 1917. Frank and his wife Luise moved the family to a new property (Neue Mühle) on Derekh Bet Lehem where they lived and ran the bakery (Franks Bäckerei). Only the two large arches of the ground floor façade exist today, as the entrance to underground parking for a housing development.

Courtyard of Frank Bakery behind the family residence, Arab wagoners and carts that delivered bread

The Templer cemetery is the final resting place for these pioneers and this is where our tour of the German Colony ends. 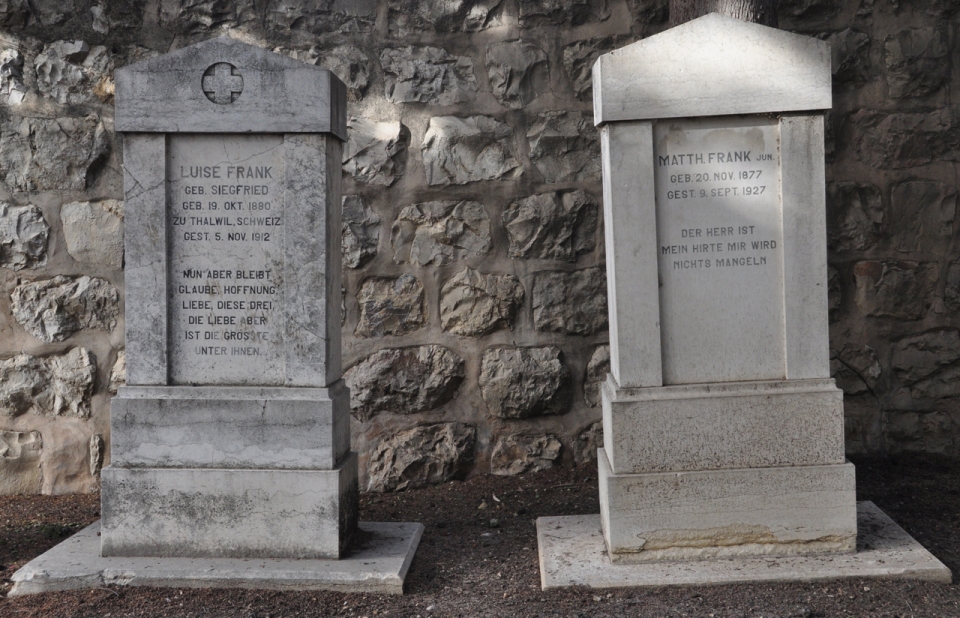