I have lived in Jerusalem, in the German Colony for more than 15 years. We bought our house in 1988 from the widow who had been given it in 1948 when she and her family had fled from Persia and arrived here as refugees. Just in the last 4 years we’ve renovated it twice – I don’t think Mrs. Hakimian would recognize it. The neighborhood too has changed, hardware stores and green grocers have made way for fancy restaurants and shops. Walking down the street you hear English and French spoken as much as Hebrew.

The land that became the German Colony was purchased in 1872 by Mattheus Frank from Arabs in Beit Safafa, as a farm for his father-in-law. Frank came to Israel from Germany in 1867 with a sect of Protestants called the German Templers. Unfortunately, the father-in-law died on his way to Israel and so it was decided to divide the parcel of land into 1 dunam lots and build a colony, planned as a street village, a strassendorf. Even with all the changes you can recognize the same layout today – individual stone houses of one or 2 stories, with gardens surrounded by stone walls, green wooden shutters and red peaked roofs along Emeq Refaim Street. Often on the lintel over the front entrance of the house is a Biblical verse in German. At the entrance to the colony was the gemeindehaus, their community center and house of worship built in 1882. 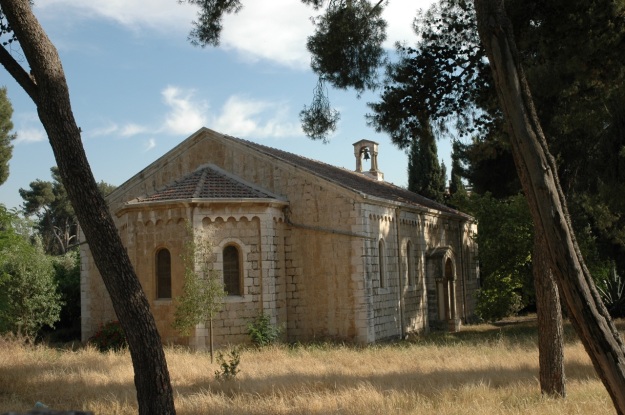 Take a guided walking tour of the popular German Colony neighborhood. Contact me to book your tour. Ask about combining a tour with lunch or dinner at one of the restaurants in the German Colony.