In 1867 a courtyard between Cotton Merchants’ Gate (Bab al-Qattanin) and the Gate of the Chain (Bab al-Silsileh) and less than 80 meters from the Western Wall was purchased from the Muslim Khaladi family* by the Hungarian Jewish community. They founded a kollel, called Shomrei Ha’Chomot (Guardians of the Walls) and a yeshiva known as Or Ha’Meir and studied Torah around the clock in 3 shifts. After a visit by Rabbi Yitzhak Ratsdorfer, a Belz Hassid and diamond merchant in 1891, they built two synagogues, Beit Yitzchak and Ohel Yitzchak, financed by and named for him. 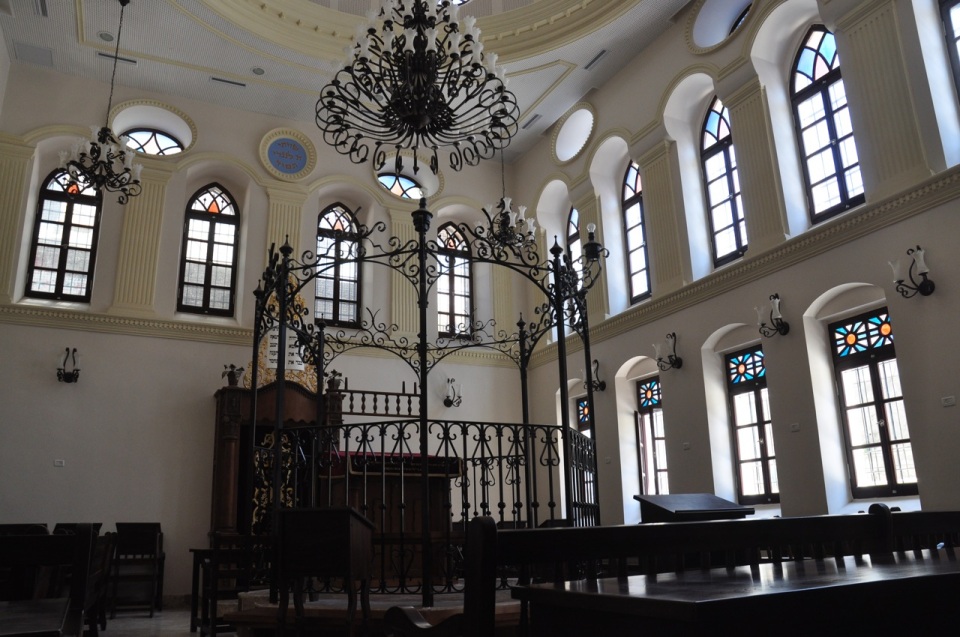 The magnificent synagogue was completed in 1904 and was on a par with the more famous Tiferet Israel and Hurva synagogues in the Jewish quarter. In 1938 because of the Arab riots the site had to be abandoned and the community relocated to Mea She’arim. During the 19 years of Jordanian Legion, the synagogue was looted and vandalized until it was a ruin, the story of more than 50 Jewish religious institutions in the Old City.

The site lay deserted until about 15 years ago, when Moskowitz bought it and financed the synagogue’s reconstruction and a comprehensive archaeological dig. In cooperation with the Israel Antiquities Authority who did the research to find old photographs and drawings of the site (I saw similar detailed documentation prepared by the IAA for the renovation of a building in Akko that will become the new Effendi Hotel) they reconstructed the building over a 10 year period using remnants of the destroyed building found at the site whenever possible. In the excavation begun in 2004 they found three steps dating back to the Second Temple period going east towards the Western Wall suggesting a monumental staircase leading to Warren’s Gate, the closest entrance to the Holy of Holies (I’ve heard that the synagogue and staircase have been connected to the Western Wall tunnels). Every historical period was represented but a major discovery was a giant public bathhouse from the Mameluke period (14th C), which lies below the entire site. According to IAA archaeologist Yuval Baruch, this is the most complete relic of the Mameluke period ever discovered in Jerusalem.

* Not far from the synagogue, along Bab al-Silsileh street in a 13th C Mameluke building is the Khalidi Library, the largest and finest private Palestinian library, and one of the largest private collections of Islamic manuscripts in the Arab world. Some of these are handwritten, one of a kind manuscripts and even autograph works written by hand by the original author (umm in Arabic). One such umm dated 1201 is a very richly decorated makrumah, or presentation copy, gilded with floral and geometric motives, a personal horoscope and family tree prepared for Salah al-Din Yusuf ibn Ayyub sultan of Egypt and Syria who defeated the Crusaders.

The library reading room is housed in the turbah, or burial place, of Amir Husam al-Din Barkah Khan and his two sons. Barkah Khan, who died in 1246, was a military chieftain of Khwarizmian origin who fought in Syria and Palestine in the 1230’s and 1240’s. His daughter was married to the formidable Mameluke sultan Baybars (1260-1277), who relentlessly fought the Crusaders. The two pairs of lions at Lion’s Gate are the symbol of Baybars.