Construction of the campus of the Hebrew University began in 1918 on land purchased from the Gray Hill estate. The dedication ceremony was held in 1925 in the presence of many dignitaries, including Lord Balfour, Viscount Allenby, Sir Herbert Samuel, Chief Rabbi Abraham Isaac Hacohen Kook, the poet Haim Nahman Bialik, Ahad Ha’am, Dr. Chaim Weizmann and many others.

A design for the university campus by Sir Patrick Geddes positioned the university buildings on the slopes of Mount Scopus, below a domed, hexagonal Great Hall recalling the Star of David, as a counterpoint to the octagonal Dome of the Rock in the Old City. This plan was never implemented, but Geddes designed the university library, today the Faculty of Law building. The master plan for the campus was taken over by German Jewish architect Erich Mendelsohn in 1935. Mendelsohn greatly influenced the local Jerusalem International Style (Bauhaus).

Notice the living sculpture outside of the Sinatra building that commemorates the nine students killed by a bomb left in the university cafeteria in July 2002, a tree growing out of the ground at an angle, by Israeli sculptor, Ran Morin. The Tilted Tree signifies humankind’s ability to withstand even the most disruptive shocks and to continue to grow upwards.

Prof. Sukenik and his colleagues, including Prof. Nahman Avigad, had planned to open a museum on Mount Scopus in 1948 to display items related to the history of the Jewish people in ancient times. Among the artifacts are ceiling tiles from the ancient synagogue* discovered in 1932 in the city of Dura Europos, located in the desert above the banks of the Euphrates in Syria. Sukenik had been invited by the Yale University team to visit the site (in Syria) and join in the publication of the findings. He was given 3 ceiling tiles that he brought back to Israel. The outbreak of the War of Independence with the result that Scopus was isolated within Jordanian-occupied territory made the opening of the museum impossible. 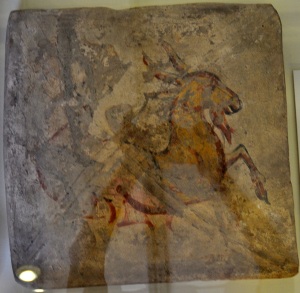 Sixty-three years later, these painted clay tiles and other artifacts have been put on display, including some half dozen ossuaries, mosaics, clay vessels, etc. from excavations in Israel by members of the Archaeology department. The modest museum is open to the public. 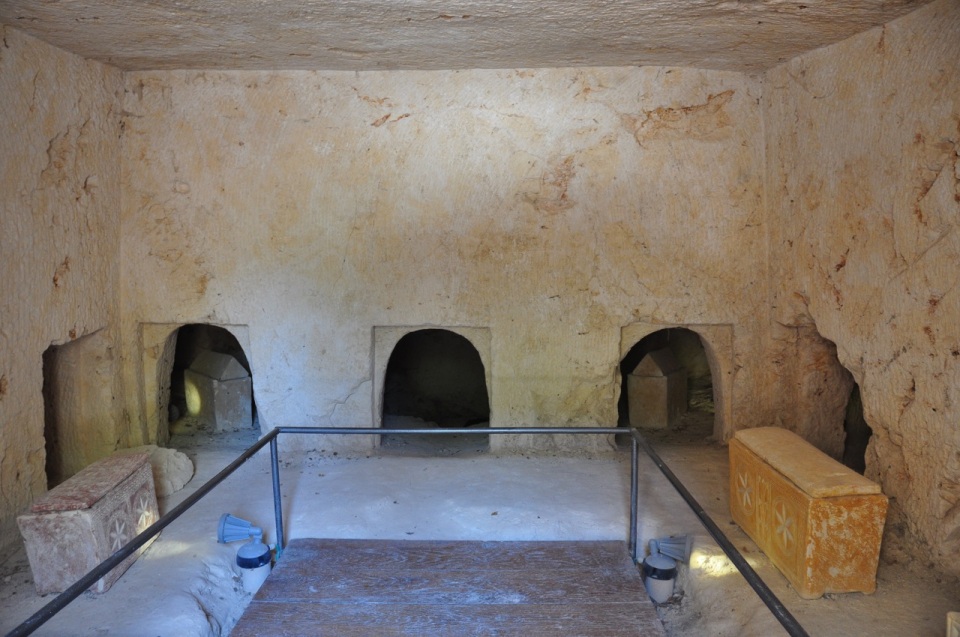 Walk through the botanical gardens organized by Alexander Eig, head of the Botany Department, based on the flora of the Land of Israel planted in 1931 to some caves with Second Temple period tombs. It was here that they found some half dozen ossuaries (the ones displayed on site are replicas, the originals are in the museum) including one with a 4 line inscription in Greek and Hebrew:

Nicanor is mention in the Babylonian Talmud in Yoma 38a, the donor of the two bronze doors for the Temple. The original ossuary is at the British museum in London.

In 1940s, Pinsker and Ussishkin, early leaders of the Zionist movement, were buried in one of the caves.

Went back to the Jerusalem War Cemetery on Mount Scopus and found the graves of Jewish soldiers who served in the British army during WWI and fought and died here. In addition, I noticed two gravestones of Turkish soldiers.

Visited the memorial at Givat HaTachmoshet to see the model of Jerusalem and how the city was divided in the ceasefire agreement of Nov 30, 1948 signed by Dayan (Israel) and el-Tell (Jordan). Article VIII of the 1949 Armistice Agreements signed by Israel and Jordan in April 1949 called for a resumption of “the normal functioning of the cultural and humanitarian institutions on Mount Scopus and free access thereto; free access to the Holy Places and cultural institutions and use of the cemetery on the Mount of Olives; resumption of operation of the Latrun pumping station; provision of electricity for the Old City; and resumption of operation of the railroad to Jerusalem.” Jordan did not abide to the agreement. There is a movie with original army footage that relates the events that divided the city in 1948 and shows how Israel recaptured the area from Jordan in 1967 and reunited the city.

4 thoughts on “A Morning on Mount Scopus”