You can’t miss the church on the slope of the Mount of Olives, its seven gilded, onion-shaped domes sparkling in the sunlight. This is the Church of Mary Magdalene built by Czar Alexander III of Russia in 1886. Dedicated to Alexander’s mother Maria Alexandrovna, it was called the Church of Mary Magdalene after her name-saint from the town of Magdala on the western shore of the Sea of Galilee.

Mary Magdalene is mentioned as one of the women who “ministered to him [Christ] of their substance”. The New Testament also tells the story of an exorcism on Mary that cast out seven demons (Luke 8:3). One of the best-known women in the New Testament, Mary accompanied Jesus on his last journey to Jerusalem, was present at the crucifixion and was the first person to see Jesus after the resurrection (Mark 16:9). Though she was very close to Jesus, she was never recognized by Christianity as one of the Apostles. 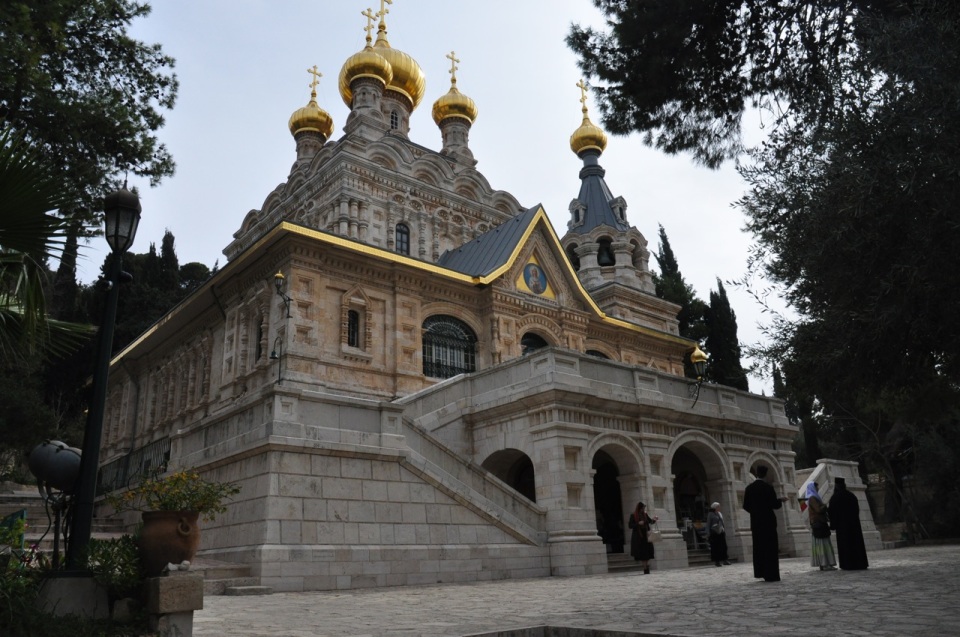 Above the main entrance to the church, located on the second level, is a gabled roof trimmed with a lace pattern in gold. A circular blue mosaic depicting Mary Magdalene piously robed in white is superimposed on a gold triangle in the gable,which is bordered with an intricately carved stone pattern. On the left side of the building is a bell tower ringed with squat squarish pillars topped by a large grey cone with several dormer like windows, a gold onion dome perched on top.

Inside the church decorated in shades of burnt orange in various patterns hangs a large metal chandelier which has small oil lamps for light. The iconostasis, a wall separating the nave from the sanctuary and altar in an Eastern church, consists of a series of arches of beautifully carved white marble, with paintings by Vereshoguine, one of Mary Magdalene. In the middle in an arch above the Holy Doors is the traditional scene of the Last Supper (click on the image to see it larger).

Six tiny paintings on the doors depict the four evangelists, the Virgin Mary, and the angel Gabriel. Over the arches of the iconostasis and high up on the other three walls are scenes with Mary Magdalene painted by Ivanov.

One of Russia’s most extraordinary saints lies in state within the church. She was Russian Grand Duchess Elizabeth Fyodorovna put to death by the Boshevists in 1917, wife of the Czar’s brother Sergei (assasinated in 1905) and sister to the Czar’s wife Alexandra. She was the creative force behind the church and supervised the artwork.

Visiting the church takes planning due to the limited hours it is open (Saturday, Tuesday and Thursday from 10am to noon) so until then check out this virtual tour at http://www.3disrael.com/jerusalem/church_magdalene2.cfm

If you are on the trail of Mary Magdalene search out the church of Saint Etienne, outside of the Old City walls just north of Damascus gate. Named for Saint Stephen, the first Christian martyr, this is a Catholic church of the Dominican order. You can’t help but notice the painting of Mary Magdalene on your right as you enter the church.

For another Russian Orthodox church with gold onions visit the Gorney monastery compound in the village of Ein Kerem southwest of the city where Mary came to visit her sister Elizabeth and where John the Baptist was born (Luke 1:39).