Magdala Nunayya (Magdala of the fishes) was an important Jewish city on the western shore of the Sea of Galilee established during the Hasmonean period, centuries before neighboring Tiberias. In Christian tradition, it is the birthplace of Mary Magdalene and where Jesus went after he fed the five thousand (Mark 8:10).

Q: What do you get when you cross a hotel, a new spiritual center and an archaeological site at the historical location of Magdala/Tarichaea overlooking the Sea of Galilee?

A: The Magdala Center, a new tourist and pilgrim destination.

The original excavations at the site were done by the Franciscan Corbo in the 1970s. Paved streets and a large colonnaded square typical of a Roman city were found, along with buildings with mosaic floors. On the floor of one urban villa an image of a sailing ship, a type of Mediterranean vessel, modified for the lake was found in mosaic. Scholars think that boats like this were used to transport goods between Magdala and the Decapolis on the eastern shore of the lake. The shape of the hull and the additional cutwater (forward curve of the stem of a ship) resembles the features of the boat discovered in the mud near Ginnosar.

In excavations from 2007 carried out by De Luca large portions of the paved Cardo and the Decumanus were uncovered. Underneath these streets were drainage channels which fed numerous wells and fountains, part of the city’s sophisticated water system. In 2008 thermal pools were discovered. The water supply system serves primarily the large thermal complex east of the Cardo and the large Quadriporticus which served as palaestra (rectangular court surrounded by colonnades with adjoining rooms) for the visitors of the thermae. The newly discovered harbour of Magdala includes in situ: massive foundations of a tower with casemate, a Hasmonean wall built of ashlar stones with dressed margins, ramps for recovering ships, a staircase, a large L-shaped basin with breakwater and six mooring stones incorporated in the painted plastered wall – the largest and best preserved harbour on the Sea of Galilee discovered so far. Everywhere in the excavations De Luca encountered damage caused by the First Jewish Revolt in which Magdala played a major role (as recorded by Josephus). Plans are to re-open this site in the near future.

In the most recent excavations by archaeologists Avshalom-Gorni and Najar of the Israel Antiquities Authority as part of a salvage dig a building that covers about 120 square meters with simple mosaics covering the floor and frescoes of colored wall panels was found. The building has stone benches along the walls and columns that would have supported the roof and has been identified as a first century synagogue. 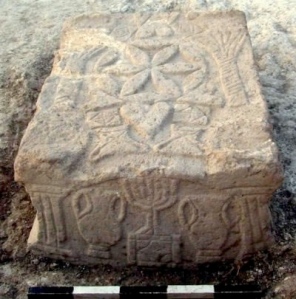 Perhaps the most interesting find is a nearly 3-foot-long limestone block found on the floor in the center of the synagogue elaborately carved on the sides and top. On one side is the first and only pre-70 Galilean depiction of a seven-branched menorah between 2 amphorae and fluted columns (another early menorah is the drawing in plaster found in a mansion in the Herodian quarter in Jerusalem). The precise function of the stone remains uncertain – it may have been used as a table on which Torah scrolls were rolled out and read. Perhaps less impressive but still very interesting is a series of mikva’ot (ritual baths) that have been uncovered that fill from underground springs. 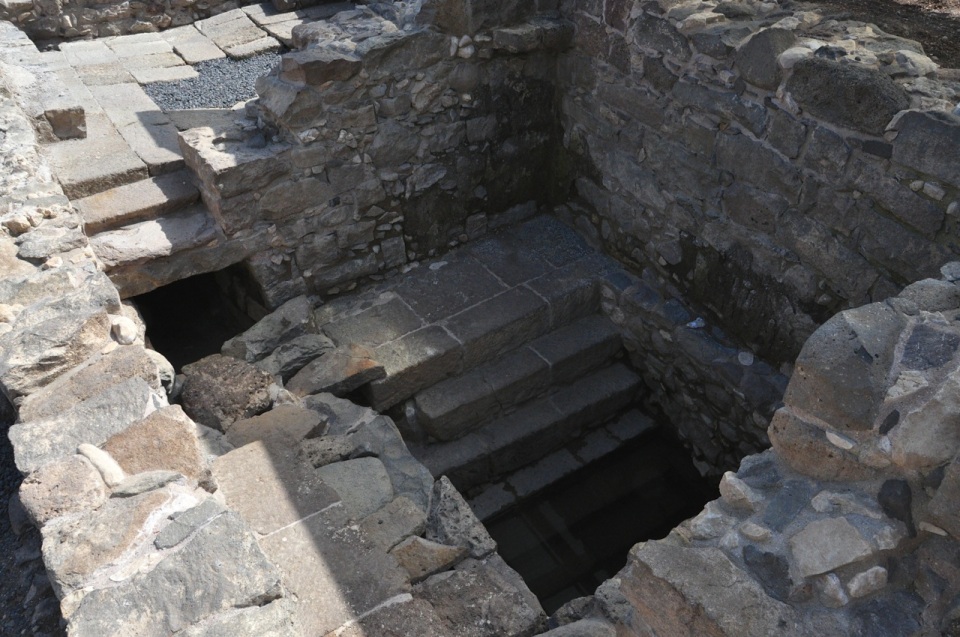 The excavations have also found the fish market and some pools used for holding and sorting the fish brought in by the fishermen, attesting to the importance of fishing to the economy of Magdala.

In the plans, besides the hotel, a church or Spirituality Center is being built called “Duc in altum” based on the words from Luke 5:4 that Pope John Paul II chose, “Put out into the deep” to say, that with God’s help, anything and everything can be accomplished. The building is in the shape of an octagon which is usual for a martyrium as opposed to the traditional Byzantine basilica (rectangular, central nave with apse, and two or more aisles). Not only the shape is reminiscent of early Orthodox churches but the interior of the main chapel is decorated with paintings of holy figures like in an Orthodox church, in the spirit of ecumenism. The area of the altar has a replica of a wooden boat so that as you sit in the chapel, you face the boat with a view of the lake behind it.

Getting into one of the boats, the one belonging to Simon, Jesus asked him to put out a short distance from the shore. Then he sat down and taught the crowds from the boat.  Luke 5:3 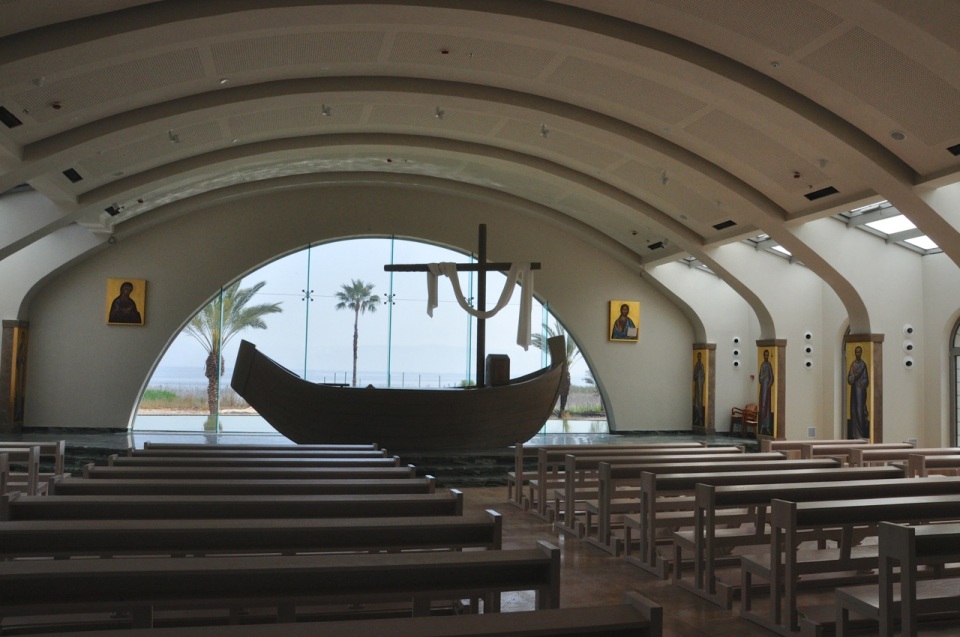 There are 4 smaller chapels off the main hall, each decorated with beautiful mosaics by artist Maria Jesus Fernández depicting scenes from Jesus’ ministry: the resurrection of  Jairus’ daughter, Jesus calling the disciples, the exorcism of Mary Magdalene and Jesus calming the waters of the Sea of Galilee. Below is an ecumenical chapel where the floor paving stones are from Magdala’s first century market. 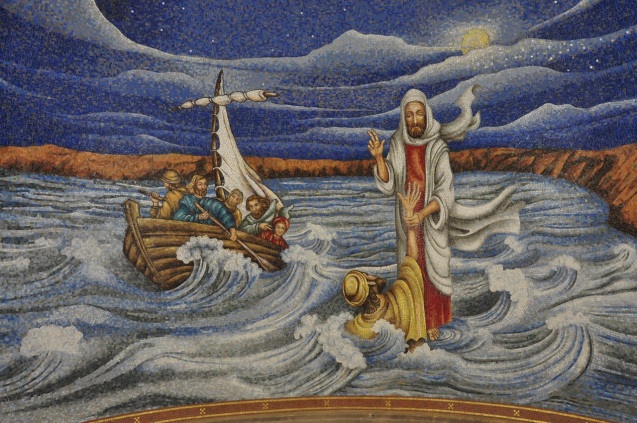 Jesus calming the Sea of Galilee 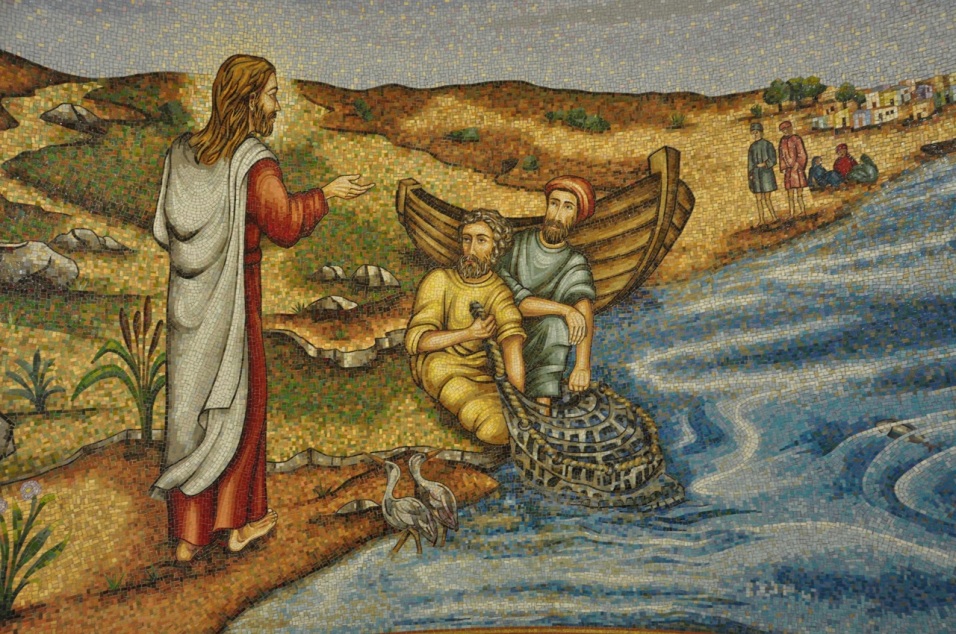 1 thought on “Magdala on Sea of Galilee”