Oskar Schindler died on September 10, 1974 in Hildesheim, Germany at the age of 66. He had requested to be buried in Israel and his Schindlerjuden survivors arranged for him to be buried in Jerusalem. You can visit his grave in the Catholic cemetery on Mount Zion. For those with GPS the coordinates are 31.770164, 35.230423 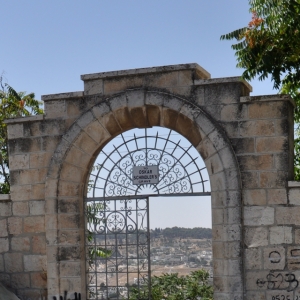 The cemetery is on the main road, Ma’ale HaShalom that goes to the Mount Zion parking lot. The cemetery has 2 levels and Schindler’s grave is on the second, lower level. There are a set of steps on the left side of the cemetery after you enter that let you descend to the lower level. The grave is right beside one of the paths, recognizable from afar because of the many stones on the gravestone. It’s a Jewish custom to put a small stone on the gravestone when you visit a person’s grave. On his grave, the Hebrew inscription reads ‘Righteous Gentile’, and the German inscription reads ‘The Unforgettable Lifesaver of 1200 Persecuted Jews’.

In 1962 a tree was planted in Schindler’s honor in the Avenue of the Righteous at Yad Vashem. Oskar and Emilie Schindler were recognized as Righteous Among the Nations in 1993.

In 1999 a suitcase belonging to Schindler was discovered in the attic of the house in Hildesheim, containing over 7,000 photographs and documents, including the list of Schindler’s Jewish workers. The contents of the suitcase, including the list of the names of those he had saved and the text of his farewell speech before leaving his Jewish workers in 1945, are now at the Holocaust museum of Yad Vashem in Israel.

Before or after visiting the cemetery you may want to visit the small Holocaust museum on Mount Zion.