If you want to meet up with a friend in Jaffa all you have to say is “Meet you at the clock tower”. The clock tower in Jaffa is one of seven built by the Ottoman Turks in 1908 on the occasion of the silver jubilee of the reign of the Sultan abd al-Hamid II. From there you can explore the Flea market and shops and restaurants. There’s a funky restaurant called Pua on 3 Rabbi Yohanan Street. For what some people swear is the best humus go to Abu Hassan’s. For a truly middle eastern taste try the stuffed breads at Abulafiya’s.

There is something else that Jaffa is known for and that is the shamouti orange which is known throughout the world as the Jaffa orange. 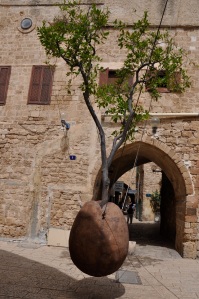 The shamouti was a new variety developed by Arab farmers after first emerging in mid-19th century Palestine as a mutation on a tree of the Beladi variety near the city of Jaffa. Orange exports grew from 200,000 oranges in 1845 to 38 million oranges by 1870. Today the orchards described by a European traveller in 1872  “Surrounding Jaffa are the orange gardens for which it is justly extolled…” have disappeared in the face of urban development. But walking through the alleyways of Jaffa you can find an incredible sculpture by the environmental Israeli artist, Ran Morin, called Orange Suspendu that reminds us of the connection between the city of Jaffa, the earth and the orange tree and its fruit. Morin has 2 other tree sculptures that are worth seeing in Jerusalem, one at the Hebrew University on Mount Scopus and one in the Olive park near Kibbutz Ramat Rahel.

From Jaffa, walk north along the promenade to Neve Tzedek, the first Jewish neighborhood that was established outside the walls of Jaffa in 1887 and that some 20 years later grew into the new city of Tel Aviv. Along the way drop in to the old Jaffa train station, that is being renovated and developed into a cultural, artistic and commercial area. For a guided tour of Tel Aviv-Jaffa please contact me. It’s possible to incorporate riding a Segway along the whole length of the promenade as part of your tour.