I just received the latest newsletter from Ir David (in Hebrew) and they have a riddle which I’ve modified slightly and include here.

This inscription, carved in stone in proto-Hebrew was discovered by chance at the southern end of Hezekiah’s tunnel in the City of David by a young boy named Jacob Eliahu who was playing hooky from school. Because Israel was part of the Ottoman Empire at the time, the Turkish authorities took the stone (which broke when it was pried off the wall) to the Istanbul Archaeological museum, Turkey.

Photo: from the Internet 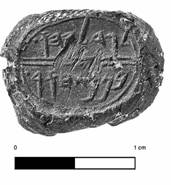 history and in relation to the bulla (a seal impression in clay affixed to legal documents) of Gedalya ben Pashur that Eilat Mazar found in her recent excavations below the stepped support wall in Area G. Explain the relationship.

Hints: Who was Gedalya ben Pashur and where in the Bible is he mentioned?