Just reported by Ynet (in Hebrew), Hirbet Midras, the site of the Byzantine church in the Ella Valley with the incredible mosaic floors, uncovered just two months ago and visited by tens of thousands of people was deliberately and brutally vandalized Wednesday night. The Antiquities Authority had made considerable effort to prepare the site and had decided to leave the mosaics uncovered so that people could visit and see them. The supervisor and archaeologist in charge, Alon Klein of the Israel Antiquities Authority’s Crime Prevention unit was shocked to find the destruction this morning when he arrived at the site. 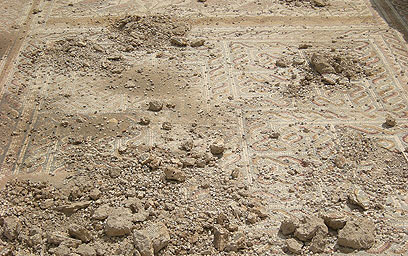 “Someone took a hammer and attacked the mosaic, digging them up in a large number of spots. A person hiking in the park had reported the damage. The mosaic looks like it has been hit by mortar shelling. It’s a sad sight, heart breaking. The mosaics suffered serious damage as a result of brutal vandalism. ” said Klein. 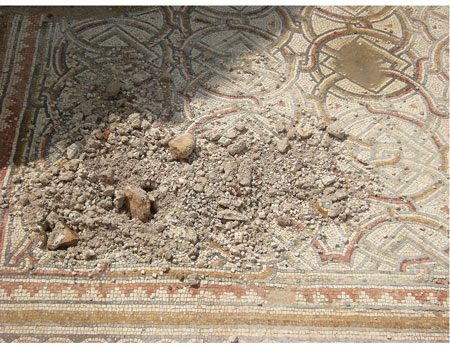 The Antiquities Authority has filed a criminal complaint with the police who are investigating. The mosaics will now be covered to protect them. When asked about whether the damage could be repaired the response was that it would be time-consuming and require a significant outlay of money but hopefully it could be done (at least to a certain degree).

This on the heels of the explosion yesterday near the entrance to Jerusalem and the escalation of rockets and mortar being fired on Beersheva and the coastal cities of Israel from Gaza. Sigh. 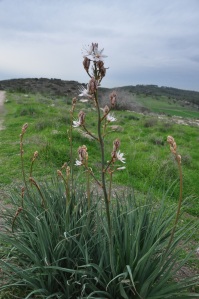 About 45km south of Jerusalem in the Ella valley, where David fought Goliath, are the ruins of an ancient agricultural settlement beginning in Iron age II, Hirbet Midras. With the recent discovery of a Byzantine church thought to be the burial place of the prophet Zechariah* people may lose sight of the fact that the site also contained a large, important Jewish settlement that dates from the Second Temple period (3rd century BCE) until its destruction during the Bar Kokhba uprising.

The site is part of a JNF park and nature reserve covering about 5000 dunam with typical Mediterranean woodlands, Kermes oak, Atlantic pistachio, terebinth and buckthorn. When I visited there were pink cyclamen (rakafot רקפות), red anemones (kalaniot כלניות) and Common Asphodel in bloom. With the recent rains, hyssop (zatar) had come up.

There were also many clumps of mandrakes (dudaim) in bloom, the fruit, which is reported in the Bible to be an aphrodisiac, will be ready late summer, at the time of the wheat harvest. 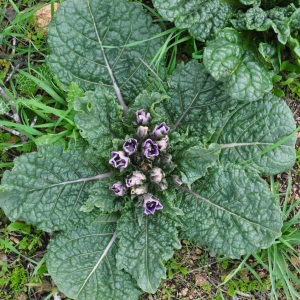 Reuven went out and found mandrakes in the field and brought them to his mother, Leah. Then Rachel said to Leah, “Give me, I pray thee, of your son’s mandrakes”.  Genesis 30:14

Among the remains at the site are various buildings, agricultural installations and an extensive complex of caves and tunnels, including a columbarium and tombs. 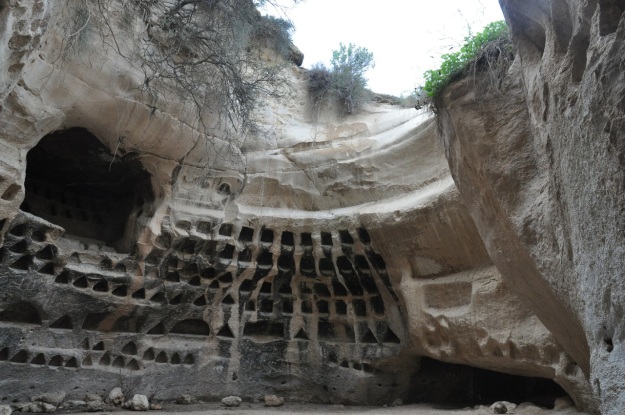 Cut out of the soft limestone is a bell cave with square and triangular niches carved in the walls that was used as a columbarium (dovecote). The pigeons were raised for food and the dung used as fertilizer. Other bell caves were used for storage and hiding during the Bar Kokhba revolt – a collection of chambers were quarried and connected to each other by tunnels. For those who like spelunking you can walk and crawl (about 20 minutes and you’ll need a flashlight and a map) from the bell cave through a circular maze of tunnels through some dozen chambers that takes you back to where you started. 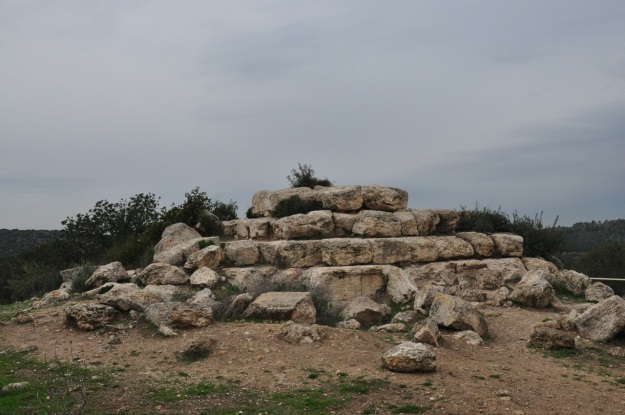 At the top of the hill with a great view of the coastal plain is a stepped, pyramid-shaped structure of dressed stone, the only one of its kind in Israel. The base is about 10 meters and the present height is 3.5 meters but 3 rows of stones are missing bringing the original height to 5 meters. This structure is a nefesh or monument marking a Jewish burial cave.

There is a wall of dressed stones up the hill near the stepped pyramid and nearby part of a niche which leads scholars to identify the building as a 4th century synagogue. 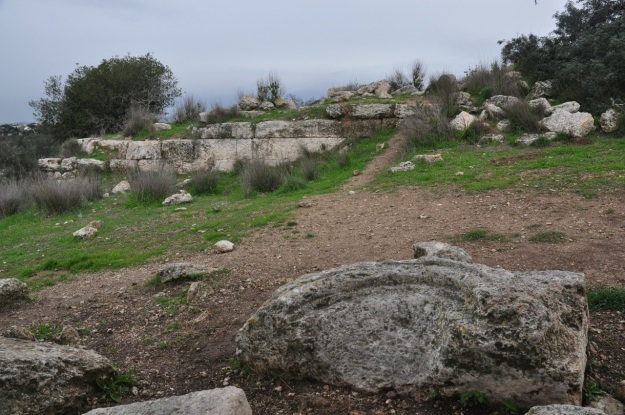 On the way back down you will pass a system of subterranean burial chambers cut in the limestone. The original opening of the cave was from a square patio, the tomb opening was sealed by a large stone disc that rolled on a track in the rock.

Nearby on the western side of highway 38 is a site with Roman milestones from the third century CE, from the days of Marcus Aurelius, with inscriptions of one of the caesars names (Septimius Severus) and his achievements.

*According to Jewish and some Christian traditions the burial place of Zechariah, along with Hagai and Malachi, the last three Hebrew prophets who are believed to have lived during the 5th-6th centuries BCE is in a large catacomb on the Mount of Olives (31.783333°N 35.250833°E). Archaeological research shows that the complex dates from the 1st century BCE, when this style of tombs came into use for Jewish burial. Some Greek inscriptions discovered at the site suggest the cave was re-used to bury Christians during the 4th and 5th centuries CE.

All of the floors recently uncovered in the church at Hirbet Midras have incredible mosaics, that are extraordinarily well preserved. The mosaics include both intricate geometric designs and floral, fauna, fish, birds and fruit. The tesserae are fine, 7mm cubes in an assortment of colors enabling the artists to create realistic images. You can click on any of the images to see it in higher resolution.

The apse of the church with a geometric rectangular carpet; the curved part has an image of a rooster and duck in a design of grapevine tendrils and bunches of grapes.

Display of mosaics in the aisle, geometric patterns on either side of a panel with chukar birds.

Close up of the chukar bird panel.

Image of a lion attacking what looks like an ibex among grapevines. Interesting to compare it with the image of the lion attacking the deer under the tree from Hisham’s Palace (Khirbet El-Mafjar, 7th century) near Jericho. 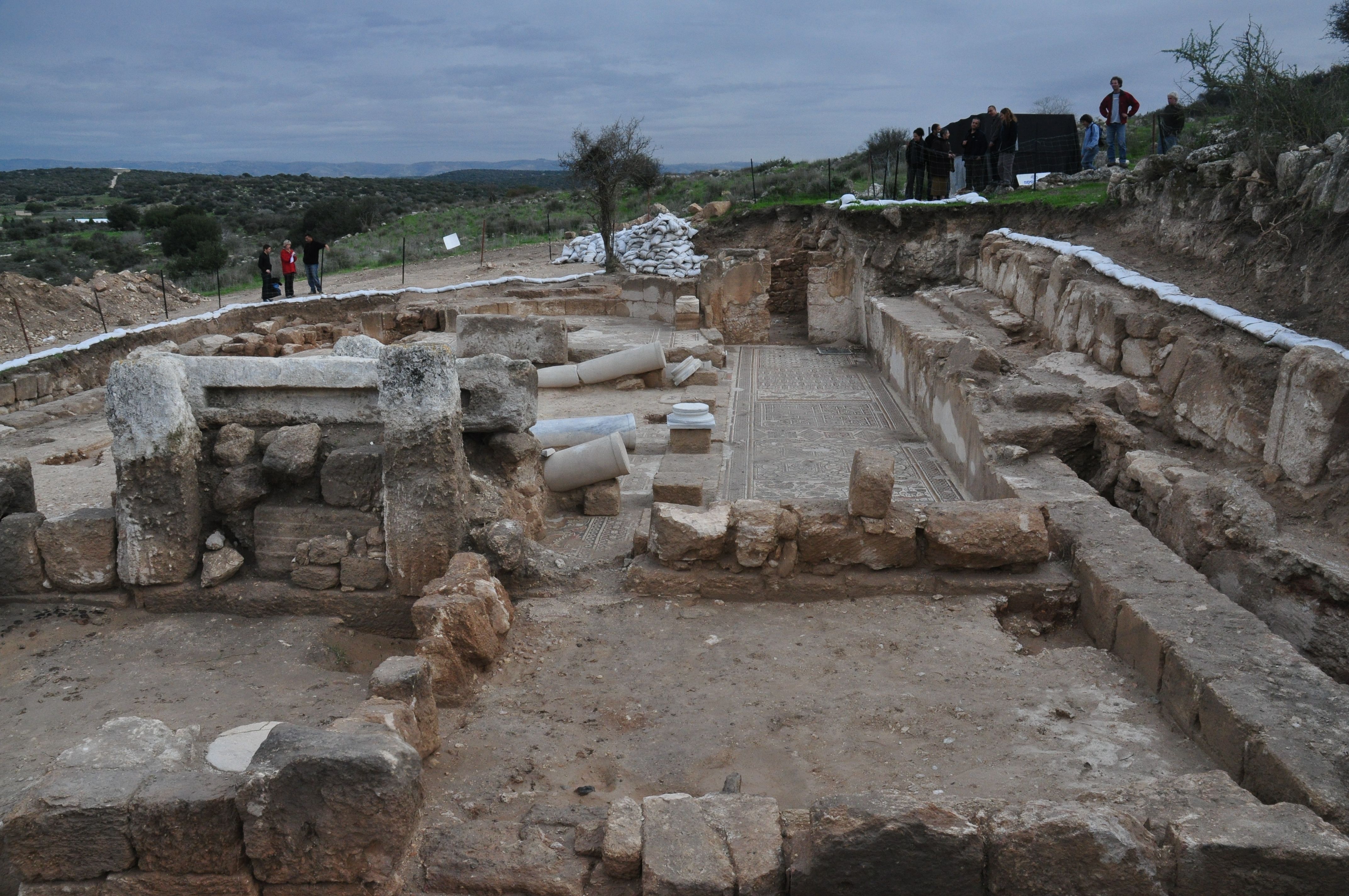 Amir Ganor is not your usual archaeologist. Although he works for the Israel Antiquities Authority he packs a handgun because his primary responsibility is apprehending thieves who plunder sites for valuable artifacts to sell on the antiquities market. In this case a group of Palestinians were breaking into the complex of tunnels and caves in the Judean Coastal Plain or shefela in the area of Beit Guvrin, specifically Hirbet Midras, looking for coins and other treasure. This led Ganor to the site where a large stone lintel was uncovered. 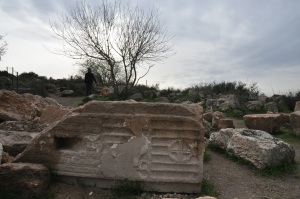 The same lintel was first uncovered in the 1980s and based on the expert opinion of Prof. Amos Kloner was thought to be from a synagogue since it was almost identical to one found in the north at Hirbet Nevoraya. Ganor requested approval and support from the Antiquities Authority to excavate the area to discover more about the public building. Within a short time very impressive and beautiful floor mosaics were uncovered. Large dressed stones with what look like Byzantine crosses were discovered when the plaster covering them fell off. Combined with the architectural details, an apse, a crypt, mosaic floors, it seems that the building was a church. The church was destroyed by an earthquake some 1,300 years ago and lay mostly covered until the 19th century. The columns and capitals are displayed exactly as they were found, lying parallel on the ground and the northern wall is angled out from the movement of the earthquake. 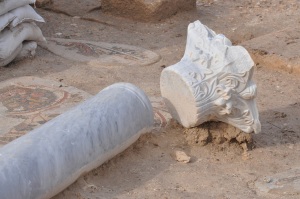 There are several construction phases, in the last two the building was used as a splendid church. However, in the first phase the excavation shows that the later church was built inside a large public compound from the Second Temple period. The church, in its last phases, was built as a basilica, a central nave and two wide aisles that are delineated by eight marble columns with magnificent capitals which were specially imported (the eight bases can be seen but only 3 capitals and columns remain). The front of the church had a large flagstone courtyard, a narthex, and at the end of the nave is a raised bema or platform (that was added later – you can see that the mosaic floor continues under the bema). 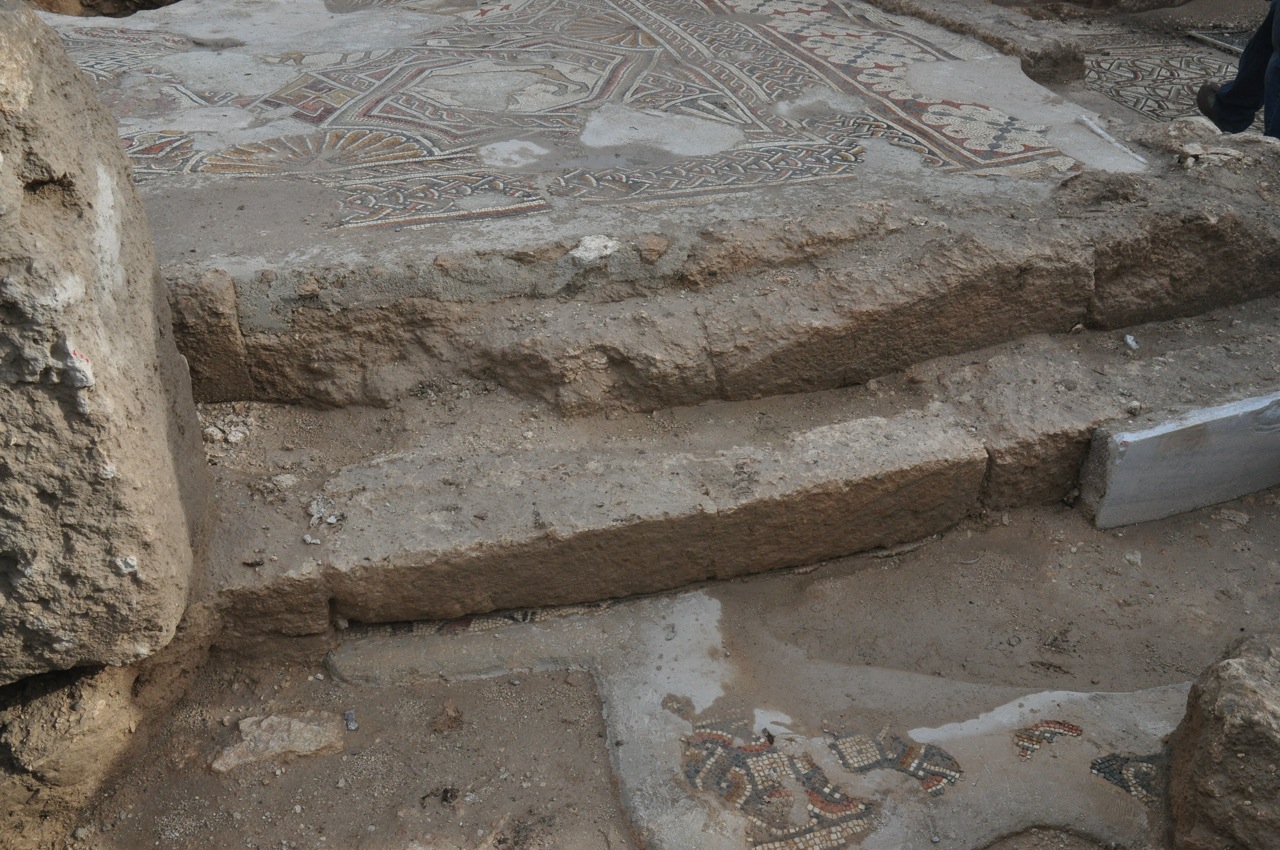 All of the floors in the building were adorned with incredible mosaics, that are extraordinarily well preserved; these include both geometric designs and floral, fauna, fish, birds and fruit. Today I went out to the site to photograph the mosaics (before they are covered to protect them until the site can be readied for visitors). You can view them at https://israeltours.wordpress.com/2011/02/04/mosaics-hirbet-midras/

Located behind the bema are two rooms, one paved with a marble floor and the other that led to an underground tomb that was empty. 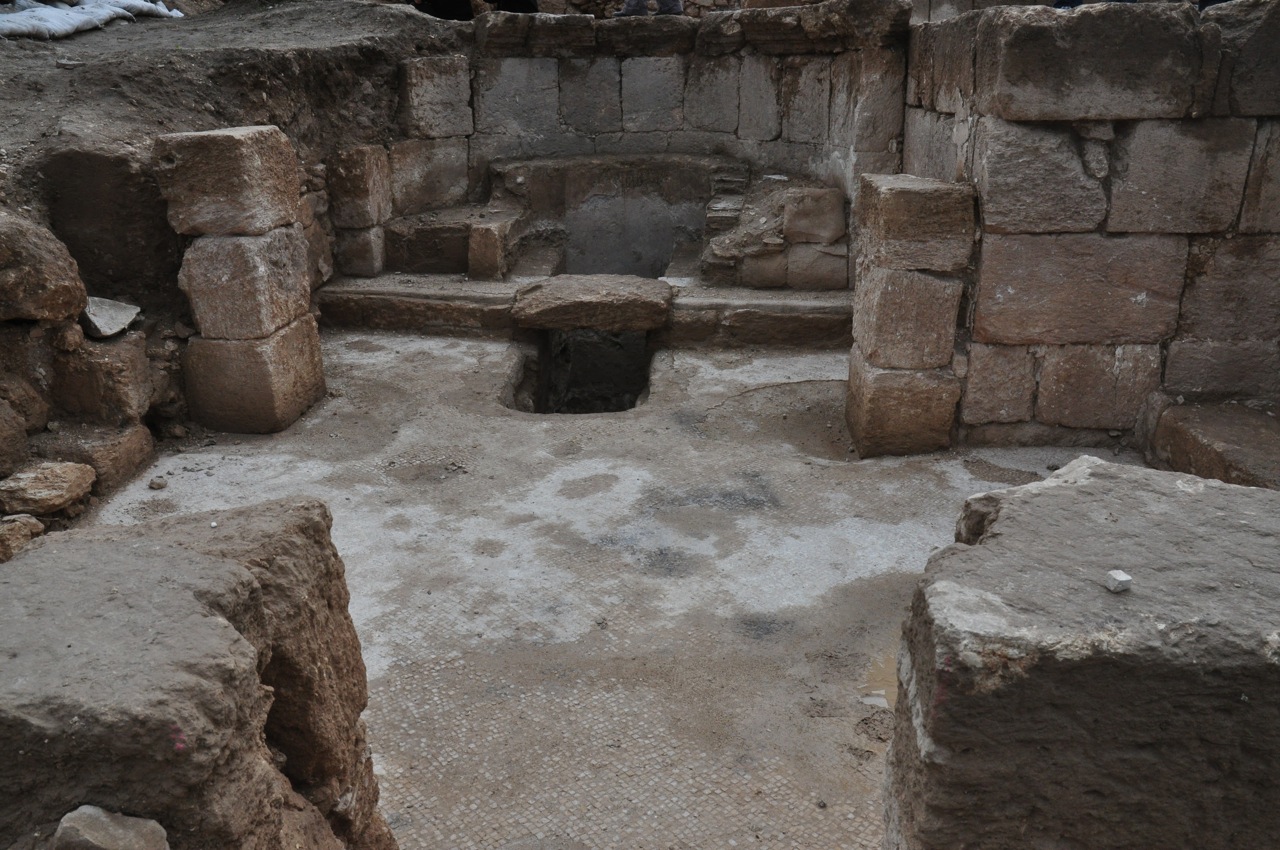 Beneath the entire building is a subterranean complex in which there are rooms, water installations, traps and store rooms for hiding. Among the artifacts discovered are coins from the time of the Great Revolt (66-70 CE) and the Bar Kokhba uprising (132-135 CE), stone vessels, lamps and various pottery vessels that are characteristic of the Jewish population from the settlement at that time. 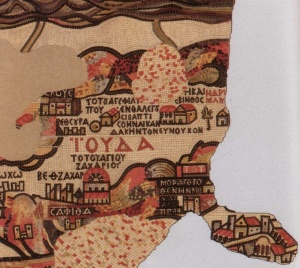 Scholars who visited the site during the excavation proposed identifying the crypt as the tomb of the prophet Zechariah. Early Christian sources identified his burial place in the village of Zechariah which was discovered in 415CE. In light of these sources, including the Madaba Map (the building with the apse with the Greek, ΒΕθΖΑΧΑΡ to its left is Bet Zechariah), scholars think the church at Hirbet Midras is a memorial church meant to mark the tomb of the prophet Zechariah.