A reader asked me to post something about the Crusaders in Jerusalem. I am happy to and also to lead tours focussing on the Crusader period.

Raymond of Aguilers, who wrote a chronicle of the First Crusade (1096–1099), relates that on the morning of June 7, 1099, the Crusaders reached the summit of Nebi Samuel, from which they saw Jerusalem for the first time. The elated Crusaders fell to the ground and wept with joy, calling it Mons Gaudi, mount of joy. The same day they reached the walls of Jerusalem.

With insufficient troops and supplies and rumor of a Fatimid advance, the Crusaders could not besiege the city for long but had to organize a direct assault.  After about a month they were able to get skilled builders and wood by cannibalizing Genoan ships that had arrived at Jaffa port for siege towers. This enabled the Crusaders to breach the walls in 3 places on July 15th. The Crusaders massacred most of the Muslims and Jews and evicted the remainder leaving Jerusalem almost uninhabited until Christians could be encouraged to settle there. On 22 July, a council was held in the Church of the Holy Sepulcher that chose Godfrey as the princeps for the newly created Kingdom of Jerusalem which became an important Christian center.

In 1160 the Crusaders added a glacis to the tower at the Citadel and dug a moat around it.

The Roman Cardo was subdivided into 3 covered markets: Vegetable or Spice market, Market of Malcuisinat and Covered market – this property was donated to the convent at Santa Anna. Nearby along David St. today, was the poultry market selling eggs, milk, cheese.

The Crusaders built a church in Kidron valley that contained the Tomb to the VIrgin Mary  and Queen Melisende was buried there. Beside it was Gethsemane and a Barluzzi church in 1920s was built on earlier Byzantine and Crusader ruins.

The remains of the Church of Mary of Latina can be seen in part of the German Lutheran Church of Redeemer that was dedicated in 1898 during the German Kaiser’s visit. 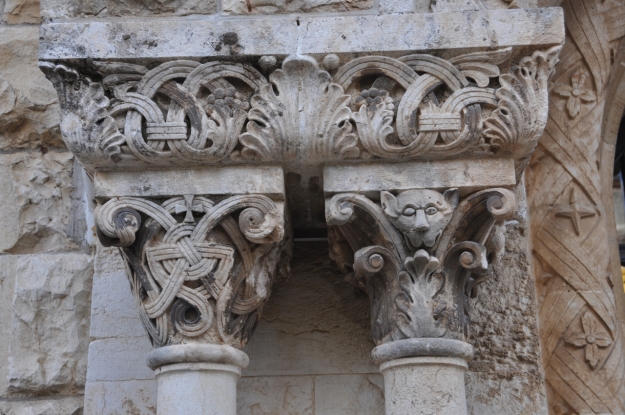 Close by is the Church of Holy Sepulcher, rebuilt by the Crusaders and dedicated in 1149. The sculpted marble panels on lintels over the two main doors, in Romanesque style, are now in the Rockefeller museum. 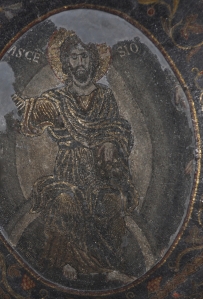 On the ceiling of the Catholic Chapel of the Nailing to the Cross (11th station) is a 12th-century medallion of the Ascension of Jesus — the only surviving Crusader mosaic in the building. Small geometric-shaped pieces of marble inlaid in the floor is a style known as Cosmati or Cosmatesque a traditional technique from the Crusader period though it was done when the chapel was renovated in 1937 by Barluzzi.

There are Hospitaler sites in the Muristan and German knights in the Jewish quarter, remains of a hospice, hospital and church, St. Mary of Germans.

Up on the Haram el-Sharif, the Knights Templar, used the Al 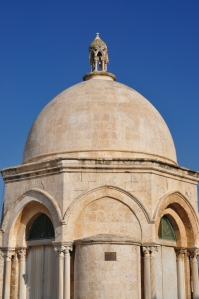 Aqsa mosque, called Templum Solomonis by the Crusaders, and the underground arches of Solomon’s stables. The Dome of the Rock functioned as a church, Templum Domini. A short distance to the northwest, is the Dome of the Ascension, which served as its baptistery. The Dome of the Chain to the east was a Christian chapel to St. James.

If you have the chance, visit the Temple Mount Sifting Project to try some hands-on archaeology and take the opportunity to see artifacts like arrowheads, coins and relics from the Crusader period.

At Bethesda Pools is the ruins of a Crusader chapel, Mary of Bethesda, built on the ruins of a much larger Byzantine church from the 5th century named for St. Mary (Church of the Probatica) and the Church of Santa Anna, one of the most exquisite examples of Crusader architecture in the country. 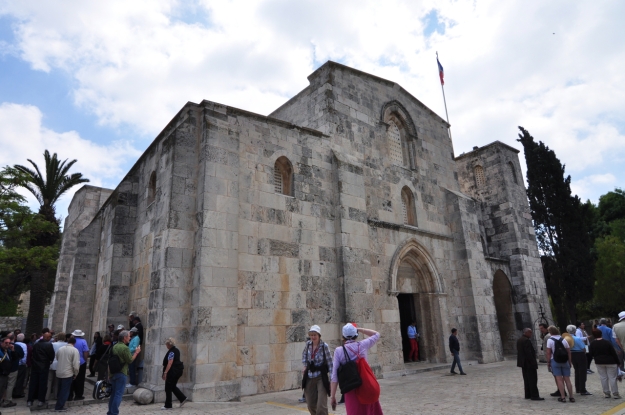 On Mount Zion, the German Dormition Abbey was built on the ruins of the Crusader church of St Mary of Mount Zion which includes an upstairs room which can be visited today, the Coenaculum or Room of the Last Supper.

The Crusaders built many buildings which affected the city’s image, adding a Christian flavor to the 450 year old Muslim city and many of these changes can still be seen in the Old City today.

On the main highway <1> between Jerusalem and Jericho is a site identified with the Inn of the Good Samaritan (mentioned in the parable in Luke 10:25-37). Remains from the first century BCE to the first century CE were found throughout the area. Abundant finds from this period include pottery, clay lamps, glass vessels, metal implements and numerous coins attesting to intensive activity that befits an inn for Jewish and then Christian pilgrims and travelers making their way between Galilee and Jerusalem. 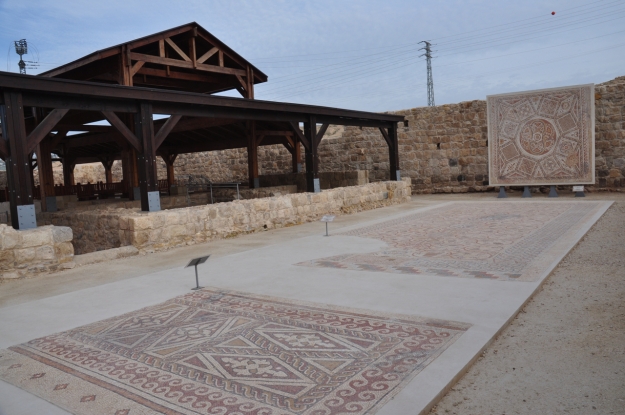 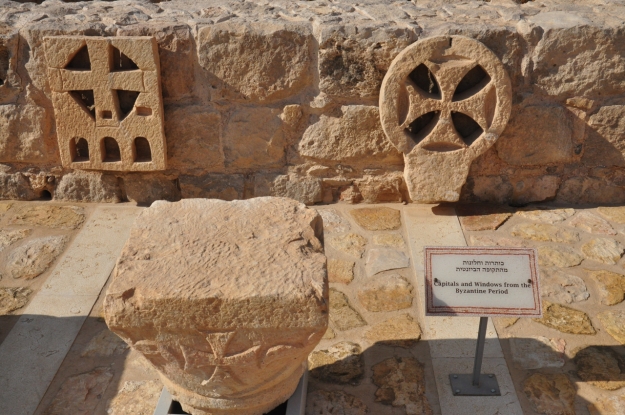 In the Ottoman period, a rectangular structure was built over the southern wall of the Crusader fortress. This building underwent numerous alterations and was restored after being damaged during WWI. It served as a roadside inn guarding the Jerusalem-Jericho road from attacks by brigands as it had for centuries.

Since the parable of the good Samaritan includes men of three faiths, the newly opened museum has chosen to display the mosaic floors and other artifacts found in churches and Jewish and Samaritan synagogues in Judea, Samaria and Gaza. It is fascinating to see the similarities and differences among the images displayed in mosaic. 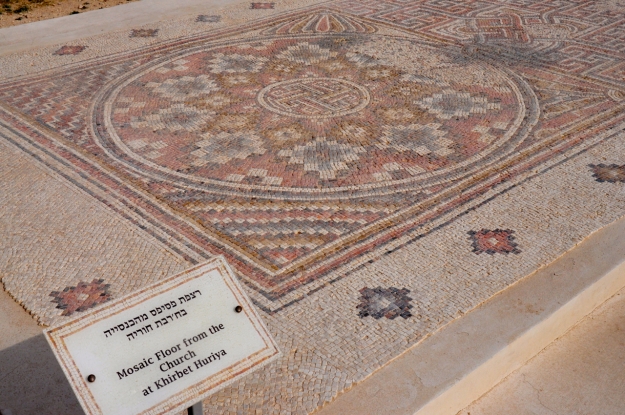 The art of mosaic began in the Greek world around the 4th C BCE and reached Israel during the Hellenistic period. It continued to develop and by the end of the Second Temple and Roman periods simple, plain and geometric mosaics became more ornate, complex with representations of flora and fauna, people, instruments, religious symbols. It became the chief means of paving public buildings, private homes, bath houses, churches and synagogues. 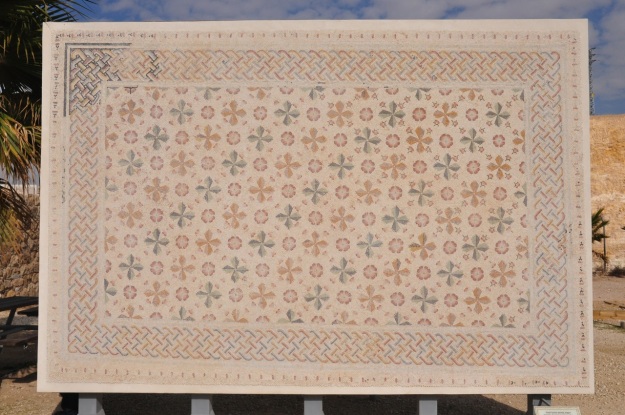 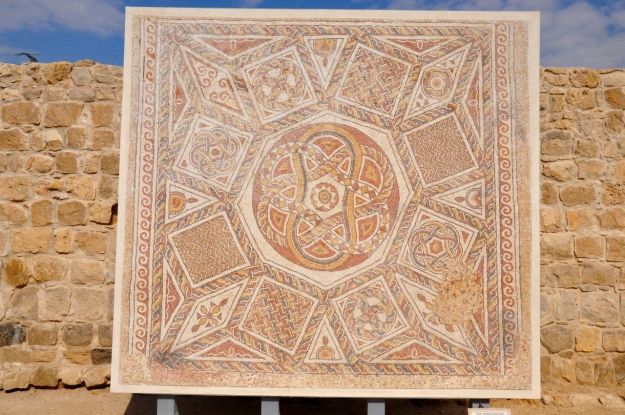 Take the cutoff to Maale Adumim to visit the Martyrius monastery (there is a combined entrance ticket; note you need to phone in advance), the largest in the Judean desert. Inside the complex the main church was paved with colorful mosaics in geometric patterns interspersed with pictures of animals; the refectory floor, discovered intact, is covered with mosaics in geometrical designs and the kitchen was also paved with mosaics.

On the opposite side of the road along Wadi Qelt visit one of Herod’s fortresses, named after his mother, Cypros. There are 2 bath houses with remains of mosaic floors.

If you are planning a trip down to the Dead Sea and Ein Gedi don’t forget to take a few minutes to check out the mosaic floor in the synagogue (your entrance ticket to the nature reserve is good for the antiquities park). The synagogue has a detailed 18 line inscription in Hebrew and Aramaic including the 12 signs of the zodiac (indicated by their names but not depicted graphically as in most other synagogues of the same period, eg. Tiberia, Bet Alfa, Tzippori). The central hall has 4 birds within a medallion, peacocks grasping a bunch of grapes, a menora and geometric patterns.