The Umayyads ruled from Damascus but built a number of palace complexes in this area – we have found ruins of their palaces in Jerusalem, at the southern corner of the Western wall and at Khirbet al-Minya, on the Sea of Galilee beside Karei Deshe.

One of the most impressive sites from the Umayyad period (661-750) is the ruins of Khirbet al-Mafjar (meaning flowing water ruins), popularly known as Hisham’s palace just outside Jericho and I am now authorized to guide tourists there.

Hisham’s name on marble, from Hamilton

The palace is identified with Hisham ibn abd el-Malik (ruled 723-743) because of an inscription containing his name, in ink on a marble slab, found at the site by Dmitry Baramki who excavated there under the British between 1934 and 1948. Based on the artwork that decorated the palace, Robert Hamilton, Director of Antiquities under the British, argued that the palace was a residence of al-Walid b. al-Yazid (ruled 743-744), a nephew of Hisham who was famous for his extravagant lifestyle which probably led to his assassination.  Al-Walid II was a hunter, poet and musician, something of a playboy who loved the good life.

The site is thought to have been destroyed by the severe earthquake of 749 CE before it was completed, but an analysis of Baramki’s detailed reports of the ceramic record indicates that the occupation continued through the Ayyubid and Mamluk periods, with a significant phase of occupation between 900–1000.

In walking around the site you will get to view the ruins of the palace, the bath complex, a pavilion and mosque enclosed by a wall; more recently, excavations to the north have uncovered an agricultural estate. The excavations uncovered fine mosaics and elaborate stucco figures, as well as stone sculpture and frescoes. The carved stucco is of exceptional quality in geometric and vegetal patterns; in the bath complex there are even male and female figures, their upper bodies naked.

A statue depicting a male standing figure with a sword on two lions, very likely the caliph patron himself, stood in a niche above the entrance to the bath hall.

The floors are decorated with incredible mosaics but unfortunately, besides the well-known Tree of Life mosaic in the bahw or special reception room in the bath complex, most are currently covered. This floor mosaic consists of a fruit tree (apple, lemon or quince) under which on the left are two gazelles grazing and on the right a lion pouncing on a gazelle. Given that the mosaic is in the bahw the image is more than just a popular hunting scene¹. Here the lion represents the ruling Caliph and the gazelles the subjects, living in peace or being subdued. 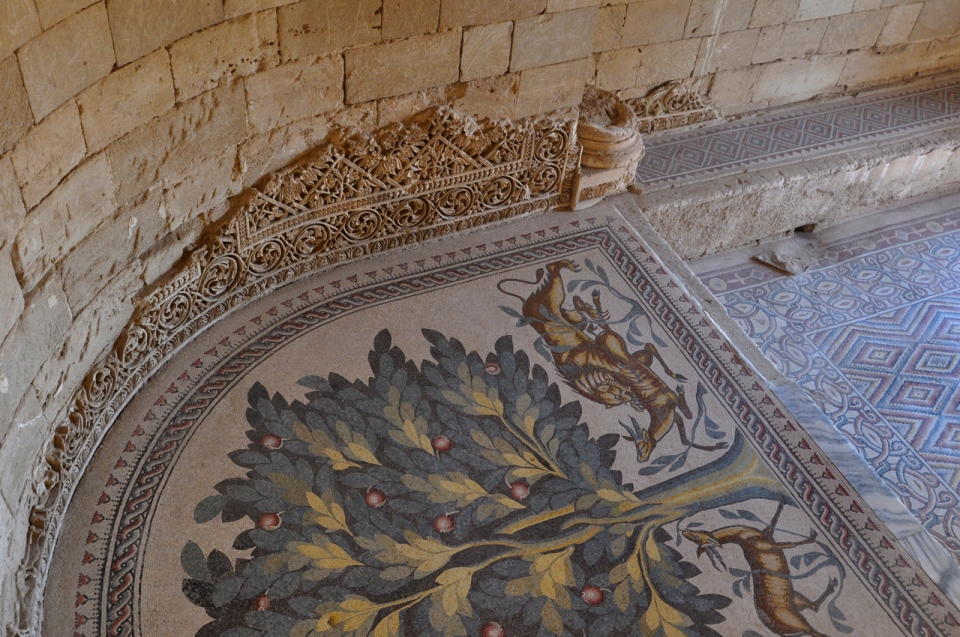 While visiting the site, don’t miss the short video and visiting the small but very well-done museum with artifacts from the site. A lot of the plaster sculptures and stucco were removed from the site during the British period and are on display in one hall at the Rockefeller Museum in Jerusalem so it’s worth planning to visit there too. 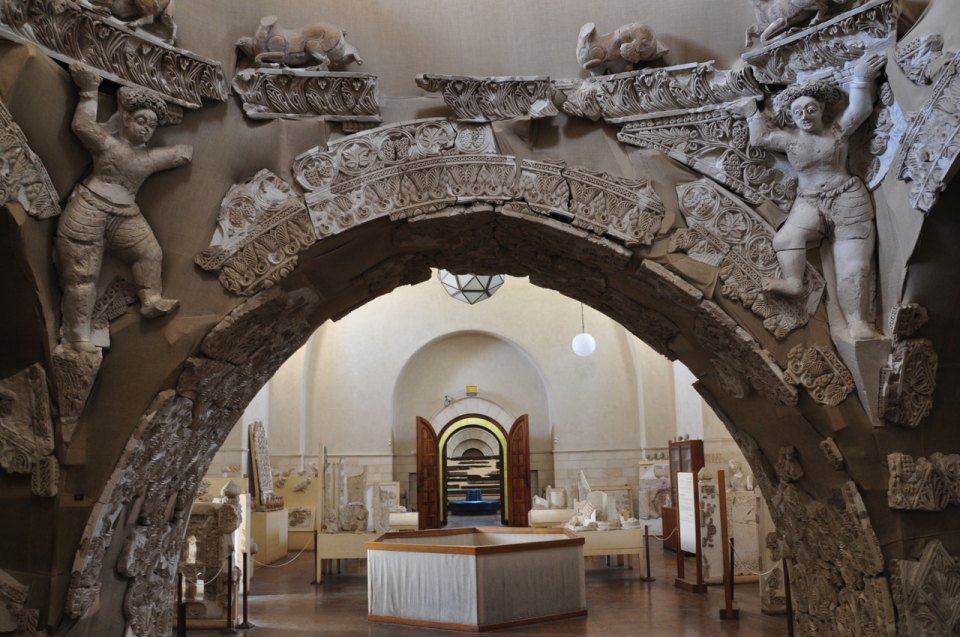 In the back corner of the courtyard are some Umayyad architectural details, part of a sculpted arch with its original paint and an example of a merlon, a step-shaped stone that sits on the top of a wall.

As your guide I can help you create an itinerary that matches your interests and ensures that not only do you get to visit archaeological sites which enable you to understand the context but museums that display and explain the artifacts discovered at the site so that you get the most out of your visit.

¹ Interestingly, I saw a similar motif in mosaic from a Byzantine church on display at the Israel Museum. 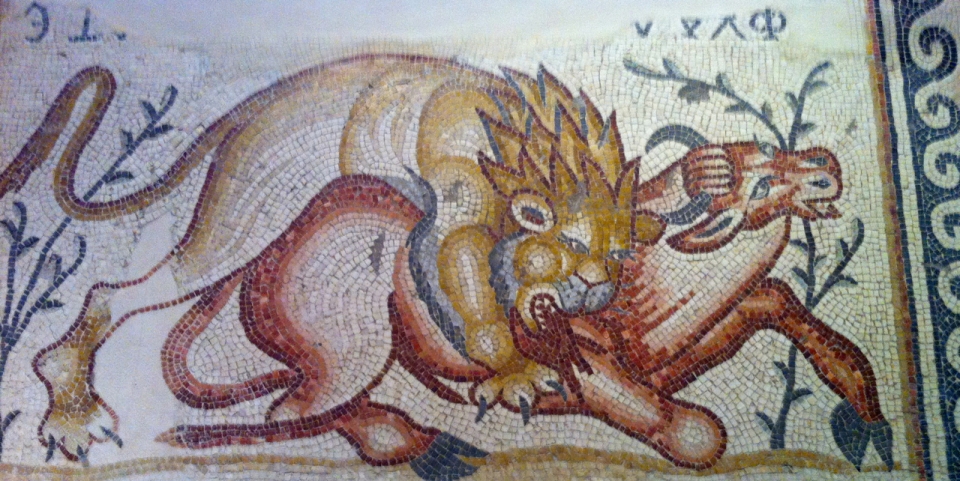 2 thoughts on “Hisham’s Palace in Jericho”