I was visiting with friend and fellow tour guide, Tom Powers, in Bethlehem and we were talking about our interest in photography and what you can learn by comparing photographs taken 100 years ago or more with the same scene today. I mentioned Francis Bedford’s photographs from Edward, Prince of Wales visit to this area in 1862 and my guiding for the BBC to Mar Saba and my blog post https://israeltours.wordpress.com/2013/03/19/mar-saba-and-judean-desert-revisited/. This reminded Tom of a photograph from the Matson collection, image #00776, titled “Prince of Wales Tree near Palestine Museum” (link to the image online at http://lcweb2.loc.gov/service/pnp/matpc/00700/00776v.jpg).

Tom did the research and wrote the captions for several hundred high-resolution photographs taken between 1898 and the 1940s in the American Colony and Eric Matson Collection. The complete set of photographs, some 4,000 images has been produced as two DVDs by Todd Bolen – http://www.lifeintheholyland.com/49_matson_american_colony_8_volumes.htm.
Here is the writeup for the Prince of Wales Tree:

The area pictured lies north of the northeast corner of the Old City. The view is to the southeast, with the Russian Ascension Tower on the Mount of Olives visible on the skyline (left). The Rockefeller Museum buildings, if they are visible at all (through the trees), would be in an early stage of construction.
A late 19th century observer describes this area as “a large field on the north-east side of the town, which extends from the town-ditch [rock-hewn Crusader moat at the Old City’s NE corner] to the splendid pine tree near an oil-press worked by the Moslems. This region is known by the general name of Kerm esh Sheikh [the Sheikh’s Vineyard]”
— Charles Clermont-Ganneau in Archaeological Researches (1899), Vol. 1, p. 248
The “Sheikh” was Muhammad al-Khalili a prominent member of an aristocratic Muslim family from Hebron who settled in Jerusalem in the 17th century and owned this plot of ground. In antiquity it was a cemetery, whose many documented burials stretch back to the Hellenistic period, and in Crusader times it served first as the staging-ground for Godfrey de Bouillon’s successful assault on the nearby city wall on July 15th, 1099, and later as a farm called by the Crusaders “Belveer.”
Muhammad al-Khalili, who served for a time as Mufti of Jerusalem, built a two-story summer residence here in 1711, the structure seen at right, which came to have the name Qasr el-Sheikh. It had an olive press on the ground floor and living quarters above and was one of the first buildings ever erected outside the Turkish city walls. Such buildings were especially useful for guarding the agricultural fields that covered the area, and the property of “Karem esh-Sheikh” was planted with olive and fig trees, date palms, and of course grapevines.
As for the tree, it is said that Muhammad al-Khalili brought the pine seedling from Hebron, wrapped in his head-covering, and planted it here. When it was grown, the venerable pine seems to have become a well-known local landmark, and over the years numerous dignitaries, including members of the British royal family, enjoyed its shade. Among them was Edward, Prince of Wales (later to be crowned King Edward VII) who visited Jerusalem in 1862 and made his encampment here, hence the tree’s name. In 1865 Prince Arthur likewise camped at the site.
In the late 19th century the Muslim Rashidiyah School was built on part of Karm el-Sheikh and it remains in use today as part of Jerusalem’s public school system. At the beginning of the 20th century the Arab neighborhood of Bab a-Sahairah, named after the nearby city gate (Herod’s Gate), grew up in the surrounding area. Then in 1919 the Mandatory government selected the site for the construction of an archaeological museum, although it was only in 1930 that the eight-acre tract, Karm el-Sheikh, was purchased from the al-Khalili family and the cornerstone was laid. Construction was completed in 1935, and the museum officially opened to the public in 1938.
At the time the Rockefeller Museum was coming into existence, the old “Prince of Wales Tree” still stood here, just to the west of the main museum site. In fact, the original architectural plan called for a rear (western) courtyard surrounded by cloisters, which would communicate between the historic villa structure, Qasr el-Sheikh, and the main museum building. And the old pine tree, at the suggestion of Rockefeller himself, was to have pride of place at the center of this court, as “an ‘organic’ counterpart to the imposing tower” at the front of the building. This meant, in concrete terms, that the central axis of the entire museum complex was aligned on the tree! 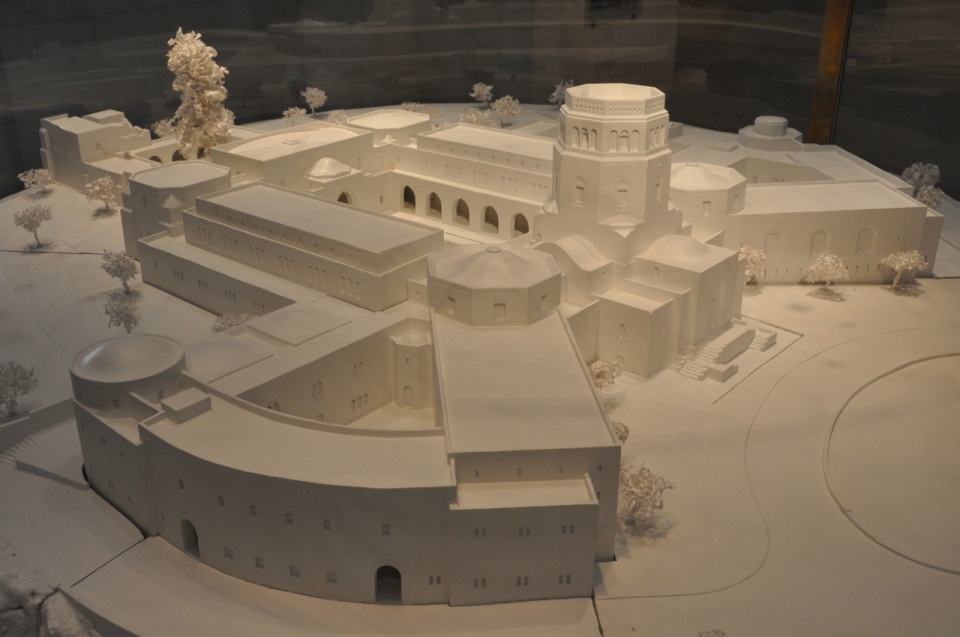 In the end, the envisioned rear courtyard was never realized, nevertheless the venerable tree — through all the vicissitudes of British, international, Jordanian and then Israeli control – stood as a silent witness behind the museum. In its later years it was actually propped up by a special concrete buttress, however by 1988 the so-called Prince of Wales Tree – then close to 300 years old – had finally died and had to be cut down. The great stump is still visible behind the museum. As for the historic villa, Qasr el-Sheikh, much of it remains intact; restored and modernized, it today houses the Restoration Department of the Israel Antiquities Authority.