Overlooking the ancient route from Beit Horon to Jerusalem (today highway <436>) is a tree-covered, limestone mountain (885 meters high) that gets its name from the Hebrew prophet Samuel who according to Judaism, Christianity and Islam is buried there. Another tradition, supported by archaeological evidence, is that this site is Mizpeh, where Samuel anointed Saul, the first King of Israel and where King Solomon made a thousand burnt offerings at the high-place of Gibeon – the biblical city of Gibeon is only 1.5 km north of the site, today the Palestinian village of el-Jib, behind the separation wall. Excavations, still ongoing, have uncovered the remains of settlements from both the First Temple (7th century BCE) and Second Temple (Hasmonean) periods.

According to the Biblical text I Samuel 25:1 it says that “Samuel died and all Israel gathered and lamented him and buried him in his home(town) in Ramah”. If this site is Mizpeh, then there would be a problem. In the Byzantine period (6th century), Christian tradition said that the prophet’s bones were relocated here and a monastery was built at the site to honor Samuel. In 1099, during the First Crusade, the Crusaders saw Jerusalem for the first time from here and named the mountain, Mons Gaudi (Mountain of Joy). There is still a great view of Jerusalem but of course a much different view than what the Crusaders saw. As part of the fortress that they built there in the 12th century, was a Romanesque style church over the burial cave and a hostel for Christian pilgrims on their way to Jerusalem. When the Crusaders were defeated by the Arabs under Salah a-Din in 1187 the fortifications were destroyed. In the 14th century the Mamelukes converted the church to a mosque. The building and minaret we see today is neither Mameluke nor Ottoman (though the lovely inscription over the door is) but rebuilt by the British after WWI – in the heavy fighting between the Turks and British and aerial bombardment by the British for the strategic hill damaged the building. Jewish armies fought here, from forces led by Judah the Maccabi against the Seleucid-Greeks in 165 BCE to the Harel Brigade who failed to capture the mountain during the War of Independence (1948) but were successful in the Six-Day War (1967). 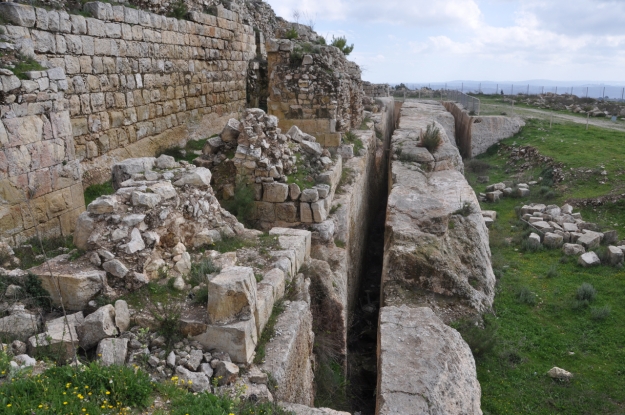 On the western side you can see a section of the moat that was never completed, the large blocks of limestone stand detached ready to be quarried. The path continues past a small Muslim cemetery through an orchard of old olive and fig trees to a spring, named for Hannah, Samuel’s mother, that flows out of a cave in the bedrock.