The enigmatic building known as the Dome of the Chain was inaccessible and hidden for eight months by metal sheeting as the Waqf did some renovations on the structure. Just a few weeks ago the building was made accessible once again so I went and took these photographs. 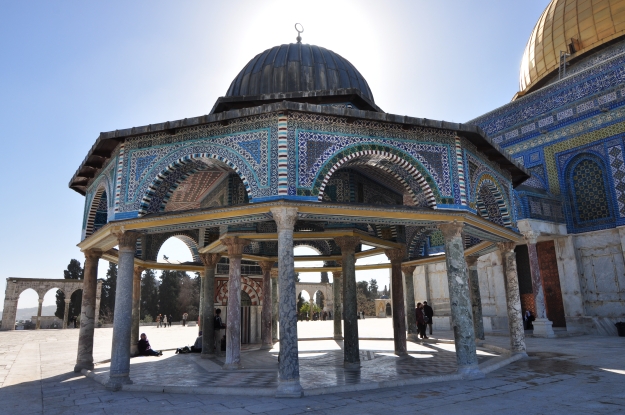 The Dome of the Chain is not a mosque or a shrine and is one of the most ancient buildings on the Haram. It was probably built in 691 during the Umayyad period by Abd al-Malik who also built the Dome of the Rock. Some think the structure, because of its position in the precise center of the Haram, existed prior to Islamic rule in Jerusalem and refers back to the days of the Jewish temple or at least to the traditions that surrounded it. There is a tradition that the Dome of the Chain is the site where King David hung a chain that could not be grasped or touched by anyone deceitful, unjust or wicked and where his son King Solomon administered justice.

With the Crusader conquest it became a Christian chapel to St. James, restored as an Islamic prayer house by the Ayyubids and has been renovated by the Mamluks, Ottomans and the Palestinian-based waqf. It seems that the Mamluk sultan Baibars renovated it, refacing the mihrab with marble and reducing the number of outer columns. The ceramic tiles were added in the time of the Ottoman sultan, Suleiman the Magnificent.

One of the most unusual things about the structure is that it combines an interior hexagon defined by marble columns with open arches supporting the dome surrounded by an eleven-sided polygon of columns with eleven open arches. Note that each of the column capitals is different. In the southern wall one arch has been closed as a mihrab. It is the third largest building on the Haram after the mosque of al-Aqsa and the Dome of the Rock with a diameter of 14 meters. 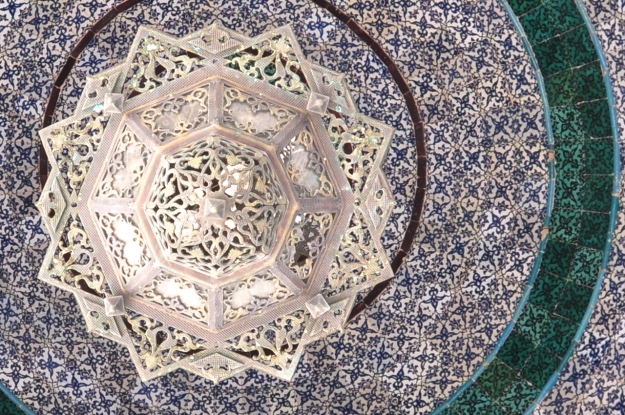 Lantern hanging from the dome of Dome of the Chain

5 thoughts on “Dome of the Chain on Haram el-Sharif”