Visitors to Caesarea may have noticed the podium where Herod built a Roman temple to Augustus. We know about it from the writings of the Jewish Roman historian Josephus:

“Directly opposite the harbor entrance, upon a high platform, stood the temple of Caesar, remarkable for its beauty and its great size.”

In the 6th century a martyrium was built in its place and in time the site was occupied by a mosque, a widespread practice when one group supplants another. In Sebaste, the Greek equivalent to Augusta, Herod built a Roman temple to the emperor in fact, part of a marble statue of the emperor was uncovered in excavations of the site. We know about the temple from Josephus:

“… in the center of the new town [Herod] erected a vast shrine with precincts dedicated to Caesar 300 yards in length. The town he called Sebaste…”

Josephus continues and reports on a third temple built to Augustus but this time he is less clear exactly where it is located:

“When, later on, through Caesar’s bounty he received additional territory, Herod there too dedicated to him a temple of white marble near the sources of the Jordan, at a place called Paneion. At this spot a mountain rears its summit to an immense height aloft; at the base of the cliff is an opening into an overgrown cavern” (The Jewish War)

“When he [Herod] returned home after escorting Caesar to the sea, he erected to him a very beautiful temple of white stone in the territory of Zenodorus, near the place called Paneion. In the mountains here there is a beautiful cave, and below it the earth slopes steeply to a precipitous and inaccessible depth, which is filled with still water, while above it there is a very high mountain. Below the cave rise the sources of the river Jordan. It was this most celebrated place that Herod further adorned with the temple which he consecrated to Caesar” (Antiquities of the Jews)

If you follow Josephus’ account then there is little doubt that he’s writing about Banias, near the Cave of Pan. There are few remains there so it is hard to ascertain if the structure was a Roman temple. The majority opinion is that the remains of the building in front of the cave is the temple and based on archaeological evidence, an Augustan-period lamp embedded in the concrete interior of one of the building’s side walls, the building was constructed in the later first century BCE. Professor Netzer holds a minority opinion that the temple was to the left (west) of the cave on a prominent terrace because of the remains of a structure with opus reticulatum (a technique sent from Rome to Judea after the visit of Marcus Agrippa in 15BCE) walls, a Herod signature since the only other two examples are at Herod’s winter palace at Jericho and a circular wall uncovered north of Damascus gate that Netzer claims encloses Herod’s family tomb; some pottery remains could also be dated to the time of Herod.

Last week I visited the archaeological site Omrit about 4 kilometers southwest of Banias. The site was first exposed by a brush fire in the summer of 1998 and excavations have been ongoing for ten years. Just as we crossed the stream to enter the fenced area of the site we came across a tangle of blackberries, ripe and delicious. I always try to add tastes when I’m guiding. In Roman times Omrit stood just south of the Scythopolis-Damascus road, a main route. 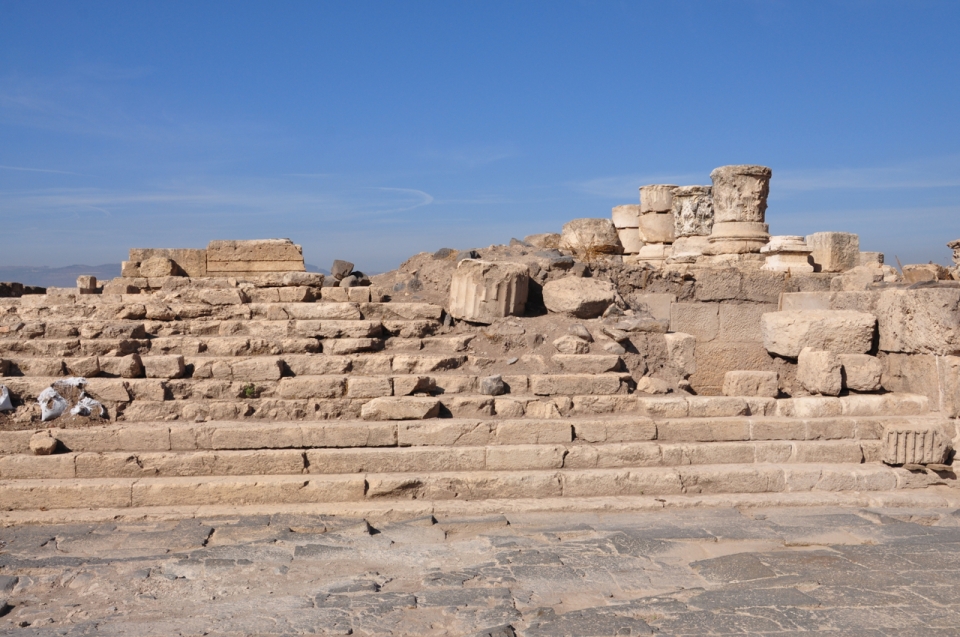 Excavations uncovered a prostyle-tetrastyle temple measuring 25.22 meters by 13.16 meters with stairs leading up to four columns in front of the temple. The height is estimated to be 22 meters.

The podium is a perfectly drafted, polished, mortarless structure made of ashlars—a signature of Herod’s grand building style. The temple’s plan reflects the type of Augusteum for celebrating the imperial cult that was common in the period. Similar temples were found at Pula, in Croatia, at Nimes, in the south of France and Pompei, in Italy; however, there were also variations in the model. Based on pottery and coins found the temple has been dated to the end of the 1st century BC. In a second phase, it was enlarged to a peripteral plan with 26 columns probably by one of the Agrippas or by Emperor Trajan at the end of the 1st century CE. The temple was destroyed by the earthquake of 363CE and a small chapel was built of stones in secondary usage at the beginning of the Byzantine period. 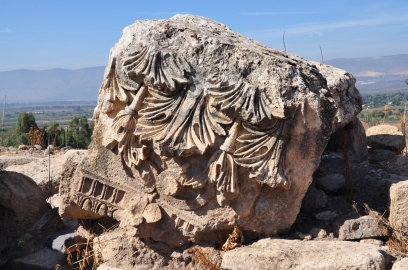 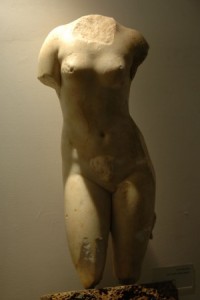 Besides the architectural elements of the temple, bases, column drums, Corinthian capitals , architraves, friezes and cornices which constitue the bulk of the major finds, fragments of statuary and inscriptions were also recovered, one which may make  reference to Aphrodite.

A marble statue was found in the fields at the foot of nearby Tel Dan (on display at the Ussishkin museum) which may have stood in the temple at Omrit. The facade of the temple is similar to what is seen on coins minted by Herod Philip – the question is whether these coins depict Herod’s temple to Augustus or a later impressive temple built by his son to mark the edge of his new city of Caesarea Philippi.

5 thoughts on “Temple at Omrit—Herod or Philip”