Today is the fast day of 17 Tammuz where we remember the breach of the walls of Jerusalem. Less than a month later on the 9 Av the Temple was destroyed. 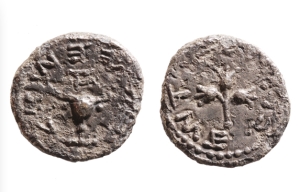 A silver half shekel coin was discovered at the Emek Tzurim National Park during the sifting of rubble from the Temple Mount dumped by the Waqf in the Kidron Valley. The coin, weighing 7 grams, is from the Great Revolt against the Romans (66-70CE). A branch with three pomegranates and the words “Holy Jerusalem” appear on one side of the coin, while the words “Half Shekel” appear on the other, in proto-Hebrew script. The use of Hebrew (and not Jewish Aramaic that came into wide use during the Second Temple) and proto-Hebrew script is popular on Jewish coins from that period. During the period of the Great Revolt, they replaced the Tyrian shekels for the annual half shekel tax that every Jewish male adult gave to the Temple treasury and Jerusalem. 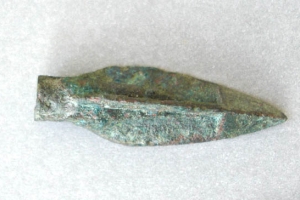 A Babylonian arrowhead was also discovered in the sifting of archaeological rubble from the Temple Mount. Only a small number of arrowheads from the 6th century BCE, the period of the destruction of the First Temple, was found as it was Babylonian army practice to gather up the used arrows. Arrowheads were found close to the top of the City of David hill, in the Jewish Quarter of the Old City and in Ketef Hinnom evidence of the heavy fighting.

Today is very appropriate to see the multi-media presentation about this period at the Burnt House in the Jewish quarter in the ruins of a house destroyed during the Great Revolt.