Every year the Passover seder concludes with a rousing “Next Year in Jerusalem”. As we clean and make our preparations this year I am struck at how fortunate I am to be living in Jerusalem and celebrating Passover here.

Just this week I went for a walk with a friend to the Old City. Our steps led us to Mount Zion and we visited the Coenaculum, the Upper Room where according to Christian tradition Jesus celebrated the Passover, the Last Supper.

… Where is my guest room, where I may eat the Passover with my disciples? He will take you upstairs to a large room that is already set up. That is where you should prepare our meal. The disciples left, went into the city and found things just as Jesus had told them. So they prepared the Passover.          Mark 14: 14-16

There are various suggestions about the date of the present chapel. It may have been built by the Franciscans in 1335 on the remains of an earlier Crusader church or by Crusaders just before Saladin’s conquest of Jerusalem in 1187 or later by Holy Roman Emperor Frederick II, after he arrived in the city in 1229. From repair work on the flooring it seems that the original building was a domus ecclesia that existed at the time of the Second Temple and perhaps used by early Jewish-Christians. Note that the building was converted to a mosque in 1523 by the Ottoman Turks with the addition of a michrab.

To bake matzah, the unleavened bread for the Passover seder, you need flour which we will freshly grind from organic wheat berries. We need spring water to mix with the flour and bake the dough (in less than 18 minutes). So today we went to Ein El Henya, a spring in the valley of Nahal Refaim, just south of Jerusalem.

The spring is typical of those found in the Jerusalem area, consisting of a dugout chamber where the water flows from the contact between the water porous limestone and a layer of marl which as it contains clay is more impervious to water. A 39 meter underground tunnel channels the water to the ruins of a building, the apse of a 6th C Byzantine church, where it cascades down into a small pool in front of the apse framed by two pilasters. The apse gave the spring its Arabic name because henya is a round niche carved out of stone. From there it follows a channel to fill a large (11 x 7 meter, 2 meters deep) rectangular pool (though I noticed that now the pool is almost empty). 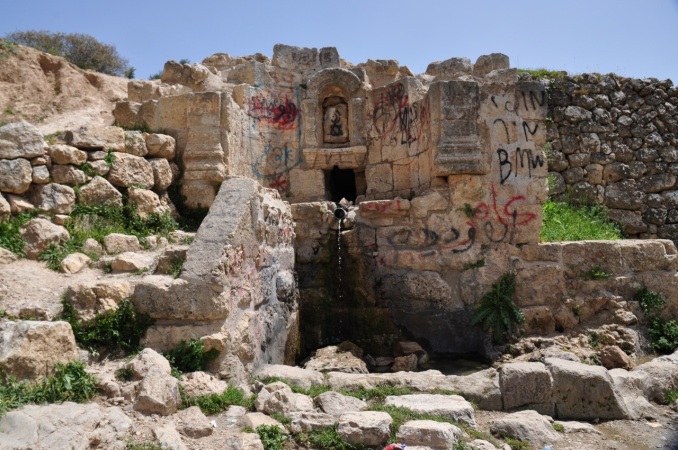 The church is named after Philip the Evangelist according to the story in Acts 8:26-40

Then an angel of the Lord said to Philip, “Get up and go towards the south to the road that goes down from Jerusalem to Gaza.”

There he met a court official of the Queen of Ethiopia in charge of her entire treasury who was sitting in his chariot reading from the prophet Isaiah. He had come to Jerusalem to worship at the Temple and was returning home. The official/eunuch asked Philip to explain what was written and was so impressed that when they came to the spring he requested that Philip baptize him there.