On a hot summer day in July 1993, Gila Cook who was the surveyor of the Tel Dan excavations in northern Israel noticed a basalt stone in the southern end of the wall by the outer outer gate as she was packing up her equipment. Here is the account, in her own words:

… I began to dismantle the level from the tripod. In this brief interval, my mind registered what I had seen. I looked again and said to myself, “Oh! These are Hebrew or Phoenician letters! It’s an inscription…with rows of characters”…. 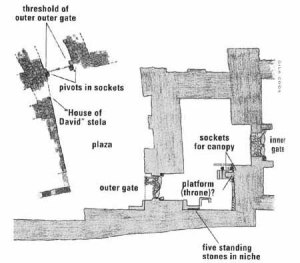 Professor Avraham Biran (1909-2008), the director of the excavations was impatient to begin the drive back to Jerusalem when Gila walked up to him. She was thinking about how to say in Hebrew “I’m going to make your day” but all she could muster was “Come”. Biran probably thought she’d been affected by the hot sun but followed her to the wall, knelt down and said “not in Hebrew, but in impeccable English, very quietly, “oh my God”. ”

Two other fragments, B1 and B2, which fit together, were discovered later in 1994. In the broken part of the stone below the smooth writing surface, there is a possible “internal” fit between fragment A and the assembled fragments B1/B2, but it is uncertain and disputed.

The text is 13 incomplete lines written in Early Aramaic, in paleo-Hebrew script commemorating victories over local ancient people including “king of Israel” and the “House of David”. The victor/author is not mentioned in the fragments discovered but would be a king of Damascus, Hazael or one of his descendants, Bar Hadad II or III. The pertinent lines translate as follows:

7′. riots and thousands of horsemen (or: horses). [I killed Jeho]ram son of [Ahab]
8′. king of Israel, and I killed [Ahaz]iahu son of [Jehoram kin]g
9′. of the House of David. And I set [their towns into ruins and turned]

The stele is dated to the 9th or 8th centuries BCE. The 8th-century limit is determined by a destruction layer identified with a later, well-documented Assyrian conquest in 733/732 BCE by Tiglath-Pileser III.

In the text, the Aramaean king claims to have killed the kings of both Israel (Jehoram) and Judah (Ahaziahu) in the course of his southern conquests. Interestingly, there is a parallel account of the murders of Jehoram and Ahaziahu in 2 Kings 9, but it is Jehu who kills the two kings in a bloody coup and seizes the throne of Israel for himself.

The inscription generated excitement among biblical scholars and archaeologists because the letters ‘בית דוד’ (Beit David/House of David) refer to the kingdom of Judah by its dynastic name, a name frequently used in the Hebrew Bible. This not only indicates that the family of David still sat on the throne of Jerusalem, but this inscription is the first and oldest textual reference to the historical King David ever discovered!

5 thoughts on “House of David Stele”