Bauhaus style was influenced by the 19th century English designer William Morris who argued that art should meet the needs of society and there should be no distinction between form and function. It was marked by radically simplified forms, the absence of ornamentation, by harmony between the design of an object or building and its function and the idea that mass-production was reconcilable with the individual artistic spirit. These criteria were a good match for the modern city of Tel Aviv, a new Israeli city built in 1909 on sand dunes of the Mediterranean coast.

 From a postcard, published by S. Adler, Haifa  Photo by J. Benor-Kalter

In 1925 as Tel Aviv grew, the innovative Scottish urban planner Patrick Geddes submitted a master plan for the city where he laid out the streets and decided on block size and utilization – Geddes did not prescribe an architectural style for the buildings in the new city. The impetus for large-scale construction came from the rapid influx of Jewish immigrants from Europe who grew in numbers from about 2,000 in 1914 to about 150,000 in 1937. In the 1930s, Jewish architects who had studied the architectural ideas of the Bauhaus school fled the rise of Nazism in Germany and converged on Tel Aviv. The residential and public buildings were designed by these architects, who took advantage of the absence of established architectural conventions to put the principles of modern architecture into practice. With their emphasis on functionality and inexpensive building materials, it was perceived as ideal for Tel Aviv. The result is that Tel Aviv has the largest concentration of International style buildings, recognized by UNESCO in 2003 when the “White City” was declared a World Heritage Site. 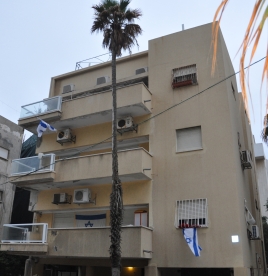 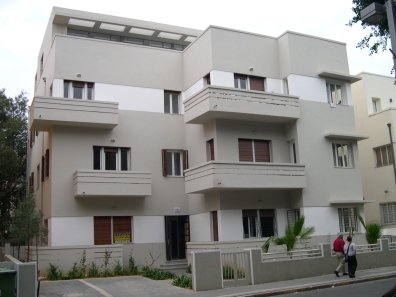 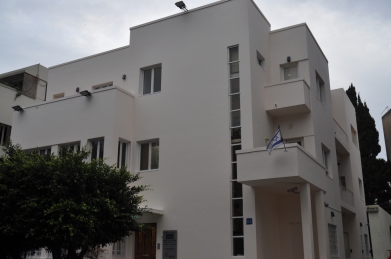 Here on the shores of the Mediterranean the “International” architecture had to be adapted to suit the hot and sunny climate.

Here are 2 highlights from the Bauhaus tour.

In 1934 Avraham Soskin closed his photographic studio at 24 Herzl Street and moved his family and typesetting business to the two winged house at 12 Lilienblum Street. Considered Tel Aviv’s first and foremost photographer because his work provides a rich documentation of the city’s early years [another idea for a tour: photographs by Matson, Soskin, Phillips, Rubinger and the sites today], Soskin (1884-1963) immigrated to Palestine in 1905.

Architect Ze’ev Rechter (1898-1960) returned from his studies in Paris in late 1932 and designed the house for Soskin.

The facade is divided into two major fields defined according to Golden Section proportions: the first is located on the east, shaped as a vertical rectangle that anchors the structure to the ground; the second is a horizontal rectangle pulled from the vertical rectangle. The building was renovated in 2005 and made into a number of apartments.

A large residential building of apartments this is the first structure in the city that was built on pillars, a modification to Bauhaus style to address the hot Tel Aviv weather, so that air could flow under the building to cool it. The space under the pillars was closed-in during WW II for use as a British headquarters but re-opened in the renovation. Located on the roof was an exercise room and a roof garden and concrete pergola in the style of Le Corbusier for the enjoyment of the tenants. Engel House was built in a u-shape around an inner courtyard, facing Mazeh St. Horizontal emphasis was created by protruding window frames around the wide, strip windows (another modification for climatic conditions). The convergence between the balconies of the two facades creates plays of mass and light and shade. For many years the building was not well-maintained but now a serious renovation has brought the building back to its roots.

Ze’ev Rechter designed the building and rented a spacious apartment there.