This is a tour of Jerusalem sites based on David Grossman’s prize-winning novel Someone to Run With/משהוא לרוץ איתו (written in Hebrew but translated into English, available at Amazon and made into a movie). The story is about two young people: Assaf, who gets a summer job with the Jerusalem municipality and is given the task of returning a lost and found dog to it’s master and Tamar, a talented musician who goes looking to rescue her brother who has gotten into trouble at the edge where youth, music and drugs overlap. As the dog, a golden retriever named Dinka, runs through Jerusalem with Assaf in tow, we too become entangled in the story. 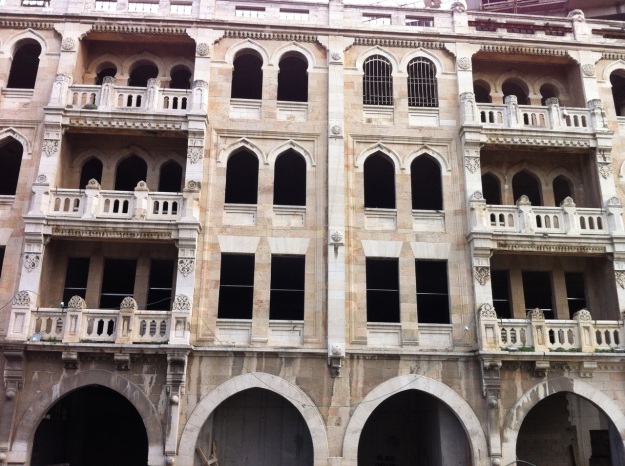 The Palace was built in 1929 by the Waqf, Supreme Muslim Council headed by the mufti of Jerusalem, Haj Amin al-Husseini. In its day it was a beautiful building with stone carvings and arches, a combination of Moorish, Roman and Arab architecture. The Reichman Brothers and the Hilton chain renovated the hotel to the tune of $100 million, to become a Waldorf-Astoria, only the 6th in the world.

Another scene takes place outside the facade of Talitha Kumi (from Mark 5:41), all that is left of the girl’s orphanage and school and the Mashbir (the large department store) that stood on King George Street where Tamar sings HaTikva, the Israeli national anthem to her brother’s electric guitar accompaniment. To me it is reminiscent of Jimi Hendrix playing the Star Spangled Banner at Woodstock (unfortunately, the clip on YouTube has been removed).

I have a golden retriever, whose name is Sumsum (which is Hebrew for sesame, the seeds that they make tehina from and also a kind of finish on Jerusalem stone which is her color) who is an offspring of one of the dogs who starred in the movie.

Join me and Sumsum as we explore Jerusalem following in the footsteps of Assaf and Dinka, experience the Mahane Yehuda market, head down to Ben Yehuda Street to listen to the buskers, have pizza, walk through Independence Park, check out the Palace Hotel, have hummus and felafel at a local restaurant. Having read the book or seen the movie before taking this tour adds to the experience.