The city of Tiberias is on the western side of the Sea of Galilee. it was Herod Antipas, one of the sons of Herod the Great, who inherited the areas of Galilee and Perea and ruled as tetrarch. The boys took after their father, Antipas built the city of Tiberias as his capital in 18 CE on an existing settlement, which he named after his patron the Roman emperor Tiberius and built an impressive palace there. His half-brother Philip built his capital at Banias In 3 BCE and made improvements in 14 CE after which Agrippa II also carried out urban improvements. During the First Jewish–Roman War, Vespasian rested his troops at Caesarea Philippi in July 67 CE before advancing on Tiberias to crush the Jewish resistance in Galilee. Today you can visit the archaeological site at Banias but although archaeologists have excavated Tiberias since 1934 (Makhouli, Guy and Rabani, Druks, Foerster, Berman, Hirschfeld, also with Gutfeld) only recently has it been possible to visit the site.

The site and its surroundings boast an array of archaeological finds from almost every period from its establishment during the first century to the Crusader period and you’ll need a knowledgeable guide to make sense of it.

map by Leticia Barda of the Israel Antiquities Authority

At the southern edge of the city are the remains of a decorative gate built by Antipas, the entrance flanked by two cylindrical towers. This gate and the Cardo leading from it continued to be used through the Early Islamic period, more than 700 years. South of the gate is a drainage system channeling the water from the winter floods into the lake – a bridge enables access to the gate and the Cardo. During the Byzantine period, the gate was connected to a wall encompassing the city and the eastern slopes of Mt. Berenice.

The other monumental structure uncovered is a Roman theater built by Antipas, with 7,000 seats, more than the theater at Caesarea built by Herod. 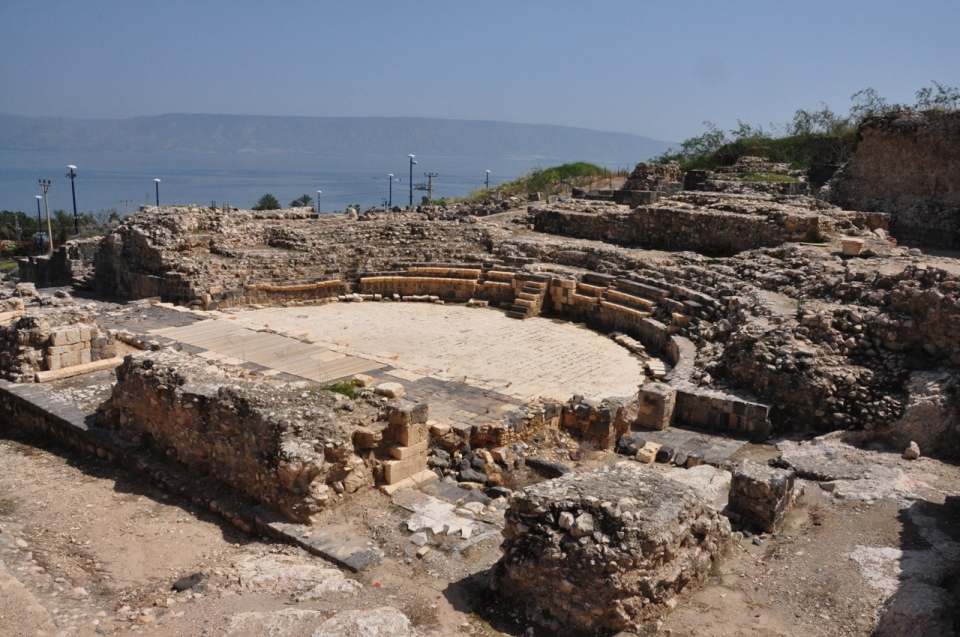 Over the years, archaeological expeditions have uncovered, a large Late Roman-Byzantine bathhouse, a broad pillared building built over what has been identified as an unfinished Roman temple (Hadrianeum), and a basilical building to the east, lying between the Cardo and the Sea of Galilee. 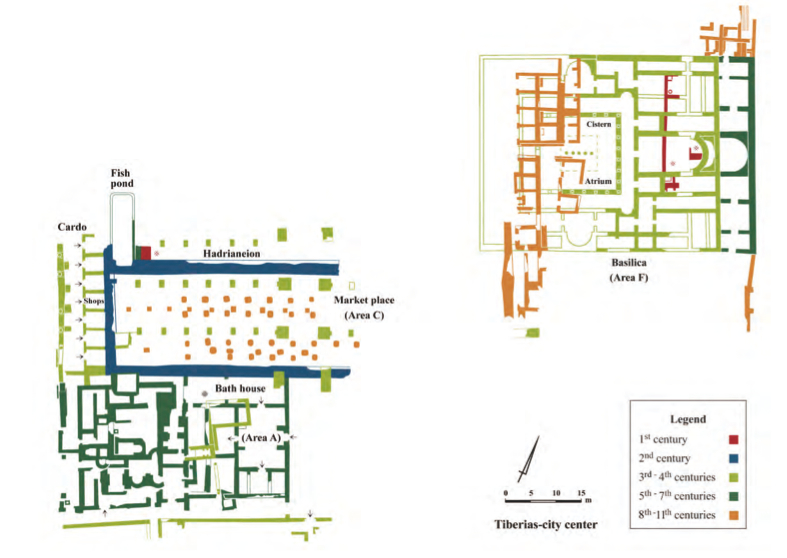 The following are excerpts from Israel Antiquities Authority article by Hirschfeld and Meir from 2006 at http://www.hadashot-esi.org.il/report_detail_eng.aspx?id=337&mag_id=111.

In excavating down to Stratum VII (first century CE), they reached the Herodian level on which the basilica was erected. Parts of a floor that consisted of divided marble slabs in opus sectile pattern and a long wall with traces of a red fresco below the basilica’s foundations were found. It is presumed that this was the remains of Herod Antipas’ magnificent palace, which Josephus Flavius described in his writings. Further exposed remains of this building included pieces of frescos painted in red, ochre, as well as blue and green, which were scattered in abundance throughout the excavation area.

At Stratum VI dated to the Roman period (second–third centuries CE) remains in Area A included the bathhouse and Area C consisted of the “covered marketplace”. Remains of the Hadrianeum––a temple dedicated to Hadrian whose construction was never completed––were discovered to the north of Area C. The Cardo was also paved during this period.

Hirschfeld excavated, among others, a large building from the late Roman period (Area B, stratum IV), which he identified as the Great Academy (Beth Midrash) of Tiberias.

Among the recovered coins from Stratum II (10th-11th Century) were 4–5 anonymous folles (‘Jesus coins’), dating to the middle of the eleventh century CE. The image of Jesus was depicted on one side of the coin and an inscription in Greek: “Jesus the messiah, king of the kings” was on the other side.

Cytryn-Silverman, who now heads the Tiberias excavation, claims that the “covered marketplace” is a mosque, in fact, it resembles the plan of the Great Mosque in Damascus, Syria.

A church that predates the mosque has also been uncovered at the site. Unlike at other sites, however, the mosque was built not over the church, but nearby.

The mosque, which symbolized the power of Muslim Tiberias, stood for 330 years, until an earthquake toppled it in 1068. In 1099, the Crusaders conquered Tiberias and used the mosque’s building stones for another structure. That, too, has been uncovered by the dig, and by the type of clay vessel found there, has been shown to be a sugar cane production plant, part of one of the country’s most important export industries at the time.

South of ancient Tiberias is a suburb by the name of Hammat Tiberias built around 17 hot springs. Within the small archaeological park are some of the remains of the ancient town of Hammat, including a synagogue from the Late Roman–Byzantine period, boasting a spectacular mosaic floor. In addition to the synagogue are the remains of an Ottoman Hammam (bathhouse complex) and the springs themselves. You can experience these hot springs at the modern spa across the road.

The remains of a Byzantine monastery and church were discovered on the summit of Mt. Berenice from which there is a spectacular view of the Galilee, the lake and across to the Golan Heights.

In the center of the present city of Tiberias a small, open-air archaeological park can be found. Within it are the remains of a synagogue dated to the Byzantine period, with a small section of mosaic floor with an inscription in Greek, Proclos son of Krispos framed by images of a palm branch and citron. In addition there is a display of architectural elements found in archaeological sites around Tiberias.

To the north of Tiberias the Umayyad caliphs built a winter palace at Khirbat al-Minya which can be visited. 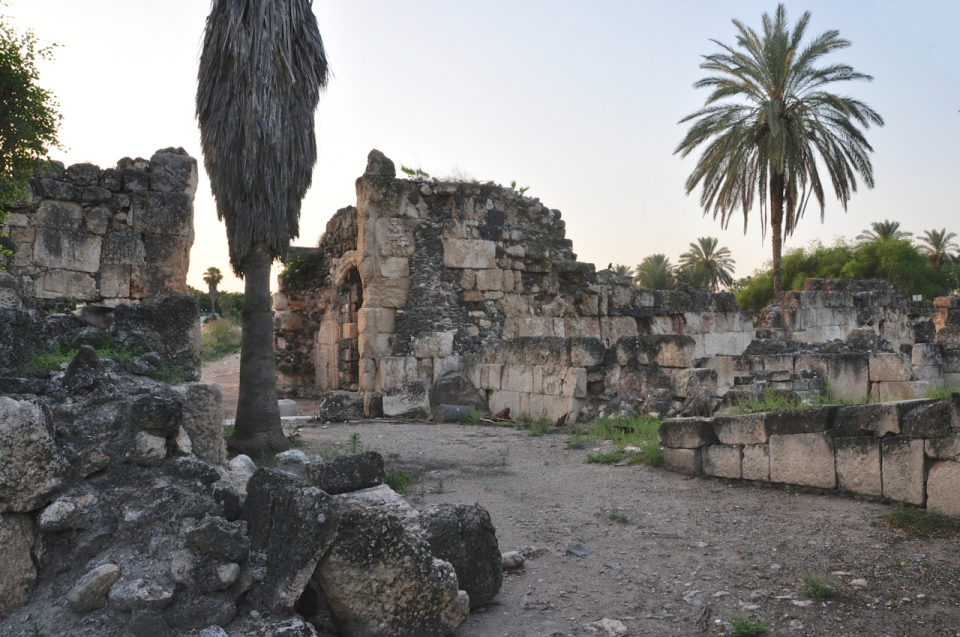 The eighth century was Tiberias’ golden age, as shown by both excavations and historical writings. A large Jewish community also flourished in the lakeside city, and that community produced the copy of the Bible that became known as the Aleppo Codex.

In 1187 Saladin’s force left Caesarea Philippi to engage the fighting force of the Knights Templar in which the Crusader force was destroyed. Saladin then besieged Tiberias which fell after six days. On July 4, 1187 Saladin defeated the Crusaders coming to relieve Tiberias at the Battle of Hattin, 10 kilometres (6 miles) outside the city making the Islamic forces the eminent military power in the Holy Land. During the Third Crusade, the Crusaders drove the Muslims out of the city and reoccupied it. In 1265 the Crusaders were driven from the city by the Mamluks, who ruled Tiberias until the Ottoman conquest in 1516.