Despite the many people traveling along the main road to Bethlehem (or Gilo or Gush Etzion) before the turnoff to Har Homa and Herodium few notice the ruins of a 5th century Byzantine church and monastery. Discovered by chance in 1992 when the road was paved and excavated briefly in 1999 by Rina Avner, the site is worth exploring but lies abandoned due to lack of money, time and initiative. Called the Kathisma church, after the word in Greek for seat (καθισμα), according to Christian tradition it is where Mary rested on the way to Bethlehem just before giving birth to Jesus. 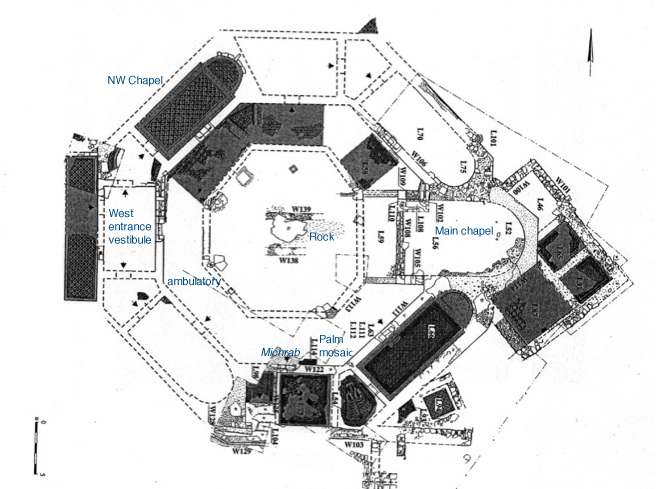 Most Byzantine churches are in the shape of a basilica, a rectangular plan with a central nave and two aisles, with a semicircular apse at the far end. Not exactly a church, the Kathisma is a martyrium, a special structure that functions as a church (or mosque) and marks the site of a holy event. Rather than a basilica, the church is octagonally shaped and built over a flat, protruding rock in the center. There are 3 concentric octagons, the innermost one around the rock, the second a walkway (ambulatoria) with one chapel and the outer one made up of 4 chapels and smaller rooms.

The floors are covered in mosaics in geometric and floral designs in white, black, yellow, green and red stone tesserae. The mosaics have been mostly covered with felt mats and sand to protect them.

One of the finest mosaics is from the Arab period, an ornate mosaic of a date palm in the southeastern corner. According to the Koran, Mary sat and rested under a palm during the onset of her labor.

There are ruins of another octagonally shaped church at Capernaum. The remains of a 5thC church were uncovered that consist of a central octagon with eight pillars, an exterior octagon with thresholds still in situ, and a portico. Later an apse with a pool for baptism was constructed in the middle of the east wall. The central octagon was placed directly on top of the walls of Simon Peter’s house with the aim of preserving its exact location. 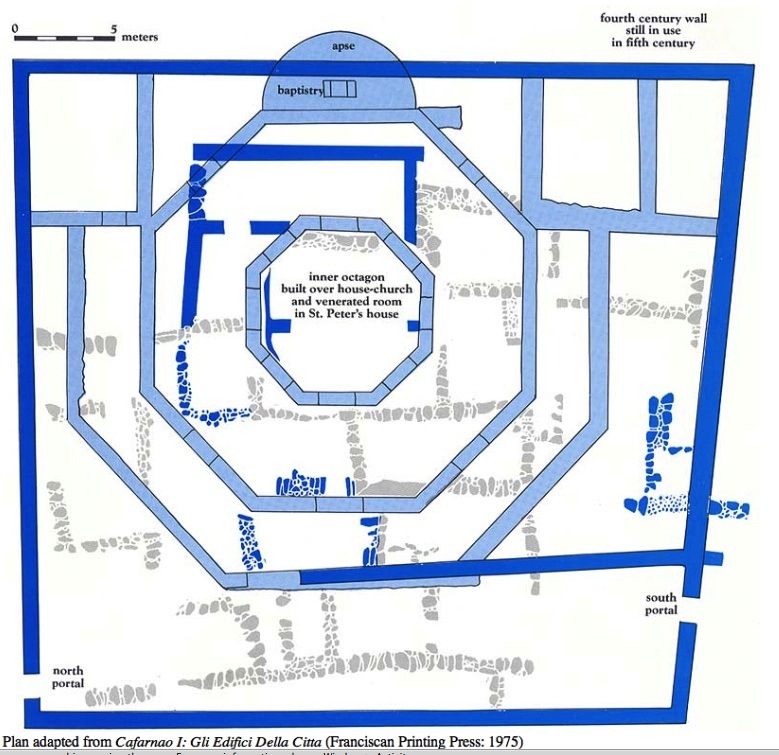 The floor of the portico is a geometric patterned mosaic. In the area of the external octagon, the mosaics represented plants and animals in a style similar to that found in the Basilica of the Heptapegon at Tabgha. In the central octagon, the mosaic was composed of a strip of flowers, a field of fish with small flowers and a circle with a peacock in the center.

Another church that is octagon-shaped and crowned by a copper dome though enclosed in a rectangular envelope is the church on the Mount of Beatitudes. The church is from 1938 and was designed by the Italian architect Antonio Barluzzi in neo-Renaissance (Byzantine) style.

According to our understanding the Kathisma church was renovated in the 6thC and used as a mosque in the 8thC after which it was destroyed. A mihrab, or prayer niche facing Mecca was built into the southern wall of the outermost octagon. This means that the church was not destroyed during the Persian conquest and existed at the time of Abd el-Malik who commissioned the building of the Dome of the Rock, a martyrium in octagon shape over a rock – it may have been the inspiration for what has been called the earliest example of Islamic architecture.