The traditional view based on the Biblical account is that in the 10th century King David ruled over a United Monarchy consisting of Judea in the south and Israel in the north. By the 9th century it had split into two kingdoms, Israel that continued to exist until the Assyrian conquest in 722BCE and Judea that continued until the Babylonian destruction in 586BCE. In contrast the Minimalist school refuted the idea of a United Monarchy and saw David as a mythical figure. The kingdom of Israel established itself first, in the 9th century (low chronology) and a monarchy developed in Judea only after the destruction of the kingdom of Israel in the late 8th century. With the discovery of the House of David stele at Dan the Minimalists had to grudgingly concede that David could exist but was a minor chieftain who ruled over a limited area, not an extensive kingdom ruled from a centralized location. With the discoveries at Khirbet Qeiyafa, a site in the Elah valley Prof. Yosef Garfinkel of Hebrew University is convinced that he has uncovered a Judean town that is dated to the 10th C. To build fortifications like those at Khirbet Qeiyafa, requiring moving 200,000 tons of stone, could not have been a local initiative but would have required a centralized government.

The site is small, 23 dunam enclosed with a casement wall situated on a hill overlooking the Elah valley with human occupation for about 20 years. Garfinkel suggests that the site was destroyed by Phillistine Gath/Tel Safi a larger town only 12 km to the west (Prof. Aren Maier who heads the excavations at Safi concurs); the Bible describes numerous border disputes in the Elah Valley region during the 11th-10th century BCE. There are only 3 building strata layers: 1) the late Roman/Byzantine period, 4th to 6th century when it included a fortress or caravansery at the center of the site, 2) late Persian or early Hellenstic period (ca. 350-270BCE) and 3) the lowest stratum directly on the bedrock dated to Iron Age IIA, existing in the late 11th to early 10th century. The dating is based on pottery and artifacts correlated with the results of radiometric (Carbon 14) dating of 4 burnt olive pits that yield a calibrated date of 1051 to 969BCE with 77.8% probablity which supports the ‘high chronology” of the biblical traditionalists.

Features and artifacts unearthed at the site suggest that it was a Judean settlement. 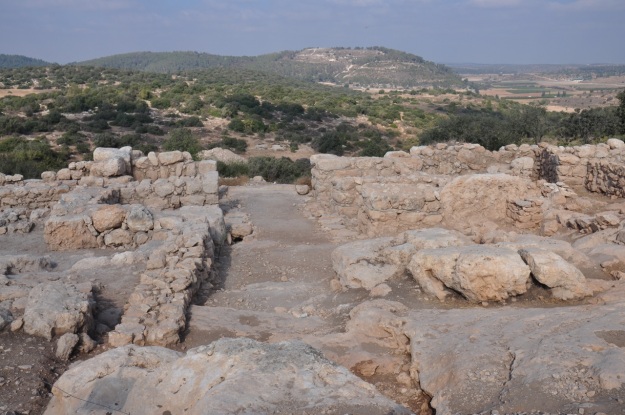 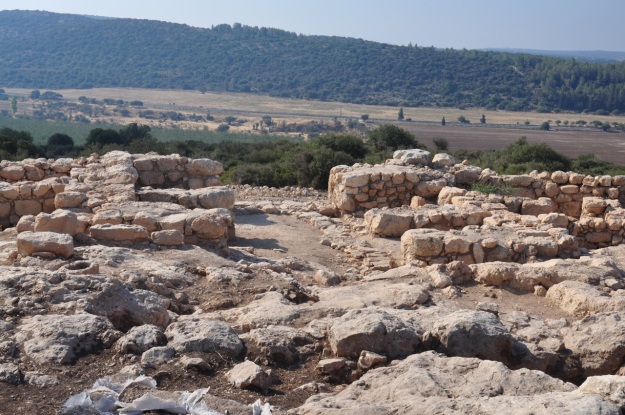 Khirbet Qeiyafa is the only archaeological site discovered in Israel so far that has two gates. Garfinkel says, “Even cities three or four times its size, such as Lachish and Megiddo, have only a single gate.” Based on location, dating and the two gates Garfinkel identifies it as Shaarayim (Hebrew for two gates) mentioned 3 times in the Bible.

It’s exciting to have the opportunity to attend an annual archaeology conference reporting on the latest research about Israel 3000 years ago. But more than that it’s possible to visit and explore the actual sites. After hearing Garfinkel’s interpretations I drove to the site to see for myself (I do guided tours of Khirbet Qeiyafa). Notice the drainage channel in the Southern gate (and our golden retriever, Sumsum, who likes to go on tours).

Prof. Israel Finkelstein of Tel Aviv University, a proponent of the Minimalist school, also gave a paper at the conference but disappointingly, he didn’t comment at all about Garfinkel’s claim. Instead, he presented a critique of Eilat Mazar’s conclusions about the Large Stone Structure and her dating of the building to the 10th C. Finkelstein argues that

Finkelstein concludes that no experienced archaeologist would claim to have uncovered a monumental building from the 10C BCE based on the archaeological evidence.