This blog post is based on an email conversation with Revd Stephen Williams of Harlington church in England.

I know you are interested in plants, and take great care to label photos of them in your blog. In Luke 17:6 Jesus speaks of a sycamine tree:

“If you had faith the size of a mustard seed, you could say to this sycamine tree, ‘Be pulled out by the roots and planted in the sea,’ and it would obey you.“

Might you have a photo (or know where you can take one) I can show my congregation here in UK?
It seems to be different from the Sycomore and the Mulberry. What do you think?

Fascinating. I’m familiar with the Mulberry tree (Morus Nigra or Alba), in fact, we have one growing in our backyard here in Jerusalem. I have photos of a large, old Sycomore tree (Ficus Sycomorus) that I shot in a park at the southern entrance to Netanya. This is the tree described in Luke 19:4, συκομορέαν (sukomoraya) which is translated as sycamore-fig and this seems to be the tree that Zacchaeus, the tax collector climbs into. 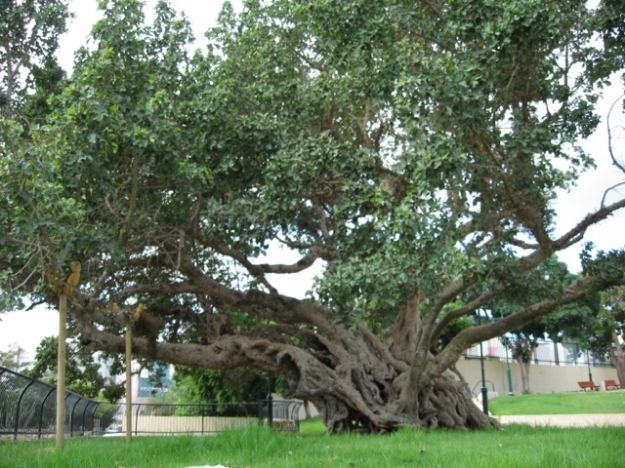 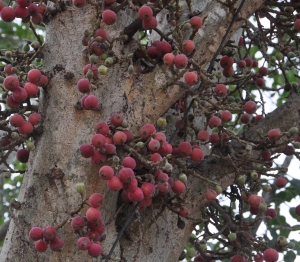 Here is a closeup shot showing the fruit.

Your question intrigued me so I contacted the Jerusalem Botanical Garden and their head scientist, Dr. Ori Fragman-Sapir. He replied that he is not familiar with a sycamine tree – we don’t know what tree Luke was referring to.

So I looked up sycomore in the dictionary, http://en.wiktionary.org/wiki/sycomore:

1.    a type of fig, Ficus sycomorus, native to the Middle East; the sycamore tree of the Bible.

Sycomore is an obsolete spelling of sycamore that hearkens closer to the word’s Greek roots. Some writers have used the more Hellenic sycomore when referring to the Biblical tree to distinguish it from other trees now called sycamore.

The Ficus sycomorus, the mulberry (Morus nigra and alba) and the fig (Ficus carica) are related, they belong to the same family Moraceae.

In the Hebrew Bible there are many references to shiqmah which seem to refer to the same sycamores, see

Psa 78:47 He destroyed their vines with hail, and their sycamore-fig trees with driving rain.

Amo 7:14 Amos replied to Amaziah, “I was not a prophet by profession. No, I was a herdsman who also took care of sycamore fig trees.

1Ki 10:27 The king made silver as plentiful in Jerusalem as stones; cedar was as plentiful as sycamore fig trees are in the lowlands. See also 2Ch 1:15 and 2Ch 9:27

You are a star. You have addressed the problem better than I could have hoped, thinking in the same analytical way I like. And the advice of Dr. Ori Fragman-Sapir is an added bonus, naturally.

Thank you so much. As you may have spotted in your searching, there is very little objective addressing of the problem out there – all the writers seem to have fudged it somewhat. But you have clarified a lot. I shall read sycaminos as fig-related, just as sycomorus is, and maybe even the same tree – though I see in Strong’s Concordance that the classical writers knew both words – Luke wasn’t just making the word up, clearly!

The tree in the park is perfect for imagining such a tree being picked up and relocated in the sea. One of the gorgeous hyperbole Jesus seemed to love perhaps?  The other interpretation is that he chose this tree as an illustration not because of its size but because of the bitterness of the fruit, which I wasn’t so convinced by, hence why nailing it down botanically is crucial.

You are right, in Luke 19:4 it’s συκομορέαν (sukomoraya) which is translated as sycamore-fig (that’s the photo I emailed you).

But in Luke 17:6 the Greek is συκαμίνῳ (sukamino) which Strong defines as “sycamine tree, having the form and foliage of the mulberry, but fruit resembling the fig”. I checked Avi Shmida’s guide book of Trees of Israel and he mentions a tree, Ficus pseudo-sycomorus which has the leaves of a mulberry and fig-like fruit – this seems to be a better candidate for sycamine. I did find two images at http://www.wildflowers.co.il/english/plant.asp?ID=2354. I will keep my eyes out for a pseudo-sycomorus which according to Shmida grows near Eilat.

Whatever the tree, to taste whether the fruit is bitter you will have to make the trip to Israel. Since you are interested in trees and plants of the Bible I mention the five fruit trees that are listed in the Bible as native to the land of Israel: grape and pomegranate – these ripen by late summer and early fall, there is freshly squeezed pomegranate juice available in the markets and various pomegranate wines; figs – are growing wild in the hills of Jerusalem and you can pick them right off the tree; olive – there are some venerable, old trees I can show you in the Garden of Gethsemane and majestic date palms in the Jordan valley. You can also taste the fruit of the carob tree (St. John’s bread), the almond and pistachio (see Genesis 43:11, where Jacob tells his sons to take of the best products of the land  to Egypt) and the Jujube tree perhaps from which the crown of thorns was fashioned (ziziphus spinachristi). And that concludes my brief treatise of trees in the Bible but you have to come and see for yourself.

I updated Dr. Fragman-Sapir about my conclusion and received this email in response.

Ficus palmata is the new and correct name for Ficus pseudo-sycomorus, so it is the same plant.
Dr. Ori Fragman-Sapir

There is a column, Plant of the Month on their website with an article about Ficus Palmata that is an interesting read.

6 thoughts on “What Tree is the Sycamine?”