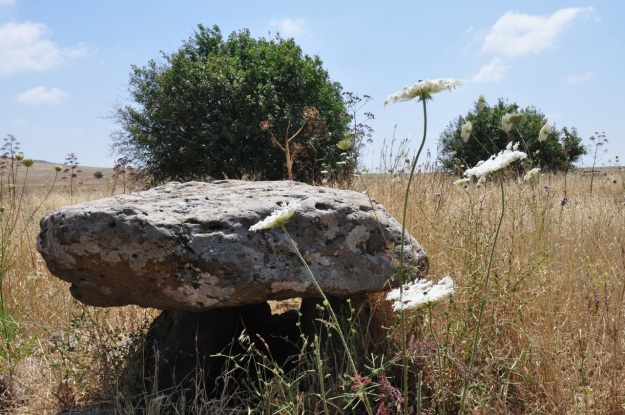 Gamla is both a nature reserve and archaeological site making it a great place to visit. We started with an easy hike, through a field of dolmens, prehistoric megalith tombs erected in the early Middle Bronze period about 2200BCE. A dolmen is made up of three large basalt stones, one lying on two other stones standing vertically. The hike takes us across a wooden bridge to the other side of Nahal Gamla for a view of the waterfall, at 51m the highest in Israel. 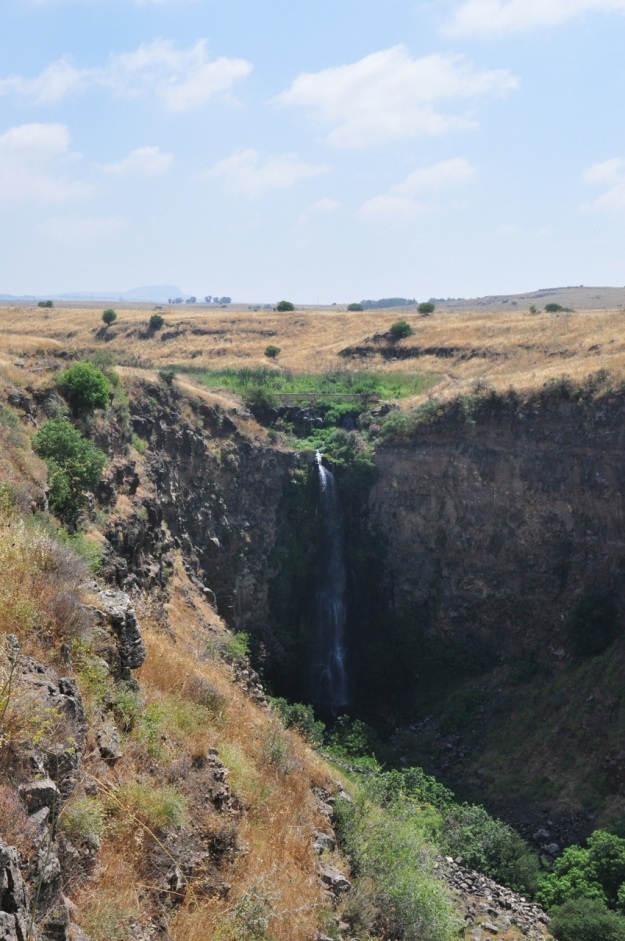 Take the trail past a Byzantine town to the Raptor lookout – the nahal is home to a large nesting population of Griffon vultures (that Israel has successfully resettled there) who did a fly past for us over the valley, it’s an incredible sight to see them gliding on the thermals.

The ancient city is situated on a steep hill (a horst like Masada) shaped like a camel’s hump, from which it derives its name (gamal means ‘camel’ in Hebrew). Jews inhabited it from the last quarter of the 2nd century BCE, and it was annexed to the Hasmonean state under Alexander Jannaeus in about 81BCE. Josephus Flavius, commander of the Galilee during the Jewish Revolt against Rome fortified Gamla as the main stronghold on the Golan. It’s fascinating to compare Gamla, a city and one of the first to stand against Vespasian’s legions with Masada, a fortress and the last to fall to the Romans.

Josephus provides a detailed description of the Roman siege and destruction of Gamla (like at Masada). Vespasian and his son Titus led the X Fretensis, XV Apollinaris and V Macedonica legions against Gamla, built a siege ramp in an attempt to take the city but were repulsed by the defenders. Only on the second attempt did the Romans succeed in breaching the wall at three different locations and invading the city. There they engaged the Jewish defenders in hand-to-hand combat up the steep hill. Fighting in the cramped streets from an inferior position, the Roman soldiers climbed onto the roofs that subsequently collapsed under the heavy weight, killing many soldiers and forcing a Roman retreat. The legionnaires re-entered the town a few days later, eventually beating Jewish resistance and completing the capture of Gamla.

According to Josephus, some 4,000 inhabitants were slaughtered, while 5,000, trying to escape down the steep northern slope, were either trampled to death or fell or threw themselves into the ravine (perhaps exaggerated by Josephus, the number of inhabitants has been estimated at less than 4,000 – at Masada 960 lost their lives).

Abandoned after its destruction, Gamla lay in ruins for almost 2000 years and was only identified in 1968 by Itzhaki Gal who was doing an archaeological survey of sites in the Golan after the Six Day War. It was excavated by Shemaryahu Gutmann (who did the original survey at Masada and who excavated there with Yigal Yadin) and Danny Syon for 14 seasons from 1976. The excavations uncovered 7.5 dunam, about 5% of the site, revealing a typical Jewish city.

The Gamla excavations revealed widespread evidence of the battle, about 100 catapult bolts, 1600 arrowheads and 2000 ballista stones, made from local basalt, 200 artifacts of Roman army equipment, quantities unsurpassed anywhere in the Roman Empire. Most were collected near the wall, placing the heavy fighting in the vicinity of the wall and the Roman siege engines to the northeast of the town.

Only one human jawbone was found during the exploration of Gamla, raising a question about what happened to the bodies of the Jewish defenders (like Masada). A tentative answer is suggested by archaeologist Danny Syon – he suggests that the dead would have been buried at nearby mass graves that have yet to be found (as at Yodfat). 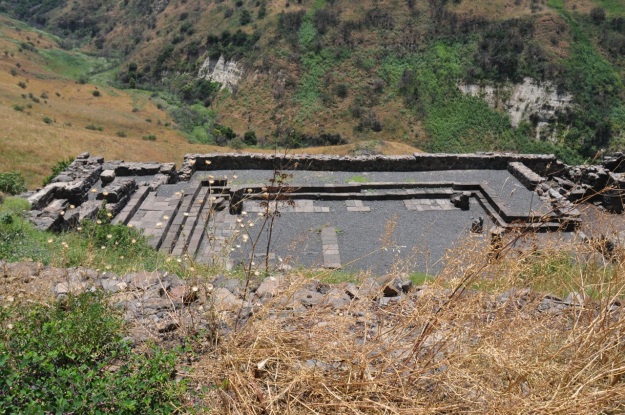 One of the most interesting finds is the remains of a typical “Galilean” style synagogue inside the city walls, with rows of columns, tiers of side benches, heart-shaped corner pillars and an alcove for Torah scrolls in the northwest corner. A mikveh (ritual bath) was found nearby. Interesting to compare this to the synagogue found at Masada. The synagogue is thought to date from the late 1st century BCE making it one of the oldest synagogues in the world.

Also found were six coins minted at Gamla during the Revolt, with the inscription “For the redemption of Holy Jerusalem” in a mixture of paleo-Hebrew and Aramaic that shows that the defenders of Gamla saw their fight against the Romans as no less than a struggle for national independence.

The Golan Archaeological Museum in nearby Katzrin displays artifacts from Gamla and other sites on the Golan and a moving film about Gamla – definitely worth a visit.